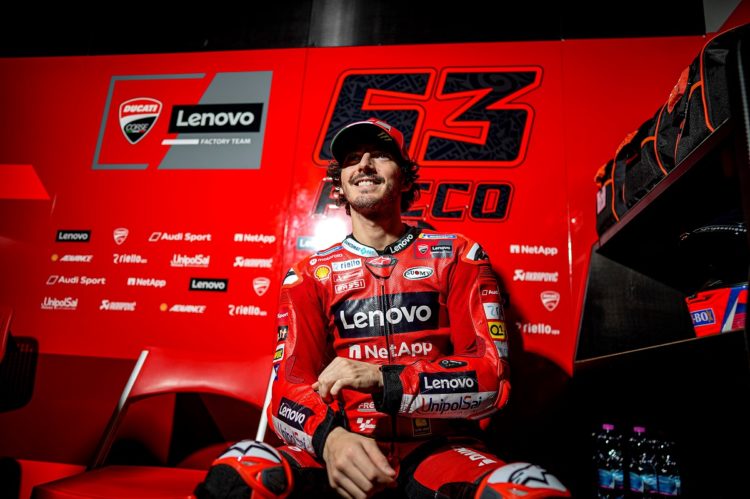 MotoGP vice-champion of 2021 Francesco Bagnaia says he will head into the winter “more relaxed” after managing “incredible” times across the two-day Jerez post-season test last week.

The factory Ducati pilot ended the 2021 MotoGP campaign as the man in form, the Italian scoring four wins in the final six contests to out-point eventual champion Fabio Quartararo by 44 markers across this period-despite also crashing from the lead in the Emilia Romagna Grand Prix in the closing stages of the race to allow the Yamaha rider to secure the title two rounds early.

Ducati at least managed to grab a first ever teams championship as well as a second straight manufacturers crown as consolation prizes, while Bagnaia continued to build upon his storming late-2021 form in the post-season Jerez test as he led the way on the final day.

The 2018 Moto2 world champion detailed some of the new parts brought by Ducati that it could potentially use on its 2022 challenger, while also being left confident for next year thanks to an “incredible” time posted on medium compound tyres that “was faster than my qualifying time” for the Spanish GP in May.

“Like yesterday I’m very happy, we worked even better and we found some very good things so we can go into the winter more relaxed,” enthused Bagnaia.

“For sure the engineers need to work a lot more to prepare for 2022, but today the wind was a lot more but we managed to ride well and the consistency was very strong.

“Like Jack (Miller) said (on new fairing) the entrance to the corner can be better but the aerodynamics are a bit worse for the long straights and acceleration, as well as the wheelie so we need to look at the data to see (if it can be improved), but overall the balance was better today than yesterday.

“We tried (longer exhaust) but it was a bit strange, because it changed the feeling quite a bit and I like it but maybe just for track like this (Jerez), it may be worse for other tracks.

“We also tried the new engine and everything worked well, we did an incredible time with the medium compound tyre which was faster my qualifying time here, so we’ve done a good job.”

Factory Ducati team-mate Jack Miller added that he was satisfied to just head into the winter break “unscathed”, though he felt that overall Ducati had managed to bring “some good” improvements to be installed on its prospective 2022 contender.

“I was looking a bit more for the sound of Australia (with new longer and radical exhaust) with the Diggeridoo, trying to bring back the heritage,” joked the Aussie.

“But no It’s been a busy day with a lot of items to be tested, some good some bad but happy to end the test unscathed and get through my job list.

“There’s been a lot of time on the bike and all the time waiting for parts to be changed and everything so it’s been a lot, we gave it a good crack but the wind sort of slowed us up and was not ideal for testing but I’m happy enough with the test.

“There are a lot of things we need to work on, but good to end the year like that.

“Some good some bad points (with new intake) it definitely needs to go back and get checked over, look through the data to understand what we need to fix and what we don’t need to fix but overall not too bad.”