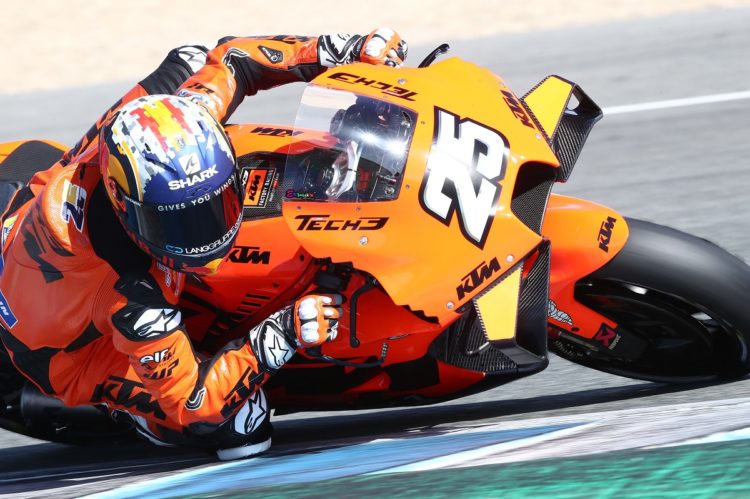 Raul Fernandez says he is “really happy” with his performance in the first 2022 pre-season test at Jerez despite being “tense” on his KTM that made running day two difficult.

The Jerez test gave the 2021 Moto2 vice-champion his first full test on KTM’s RC16 machine following a small amount of running at the Misano test back in September, the Spaniard running with the Tech 3 squad with which he will make his premier class bow next year.

Fernandez ended up as the second-fastest rookie in the combined times just a tenth-and-a-half adrift of Gresini Ducati’s Fabio Di Gianantonio and marginally clear of 2021 Moto2 world champion and team-mate Remy Gardner.

The eight-time Moto2 race winner conceded that his running on Friday was compromised due to being “tired” after feeling “tense” on his bike throughout the opening day on Thursday, though he was left confident with his performance on used tyres in particular heading into the winter break.

“I’m really happy but it was really difficult, especially physically because on the first day everything was new and I was quite tense on the bike which made things tough without relaxing on the bike,” said Fernandez.

“This meant that today I was quite tired and I couldn’t move the bike the way I wanted, and I couldn’t brake like I wanted but anyway the test was pretty good as we did a lot of running on used tyres and I was really competitive.

“We also tried to do one lap with the soft’s and I was quite close to the official riders, less than a second and the balance was positive.”

Gardner-who will join Fernandez in graduating from the Ajo Moto2 squad to the Tech 3 KTM outfit having beaten him to the intermediate class title by a meagre four points- agreed that his first full test had been “a hard two days physically”, rueing the rib injury he sustained in practice for the Algarve Grand Prix last month.

The Aussie affirmed though that he was “looking forward” to getting more laps with his new steed after improving “everytime we threw a new set of tyres at it”, his focus on learning to feel comfortable with the extra technology available relative to his old Kalex Moto2 challenger.

“For sure it’s been a hard two days physically and trying to learn the bike but I had a lot of fun and step by step am starting to learn the bike, everytime we threw a set of tyres at it we improved quite a bit, but overall the lap-time wasn’t the main goal coming here it was getting to understand the bike and the tyres,” explained Gardner.

“We also needed to try and learn the electronics like the traction control, the anti-wheelie the ride height systems and everything, but by the end of the day today (Friday) I think we had everything under control and I think we were doing some decent lap times too.

“I’m not riding to the best of my ability due to my ribs being quite sore, but looking forward to getting more laps in to further understand the bike.”