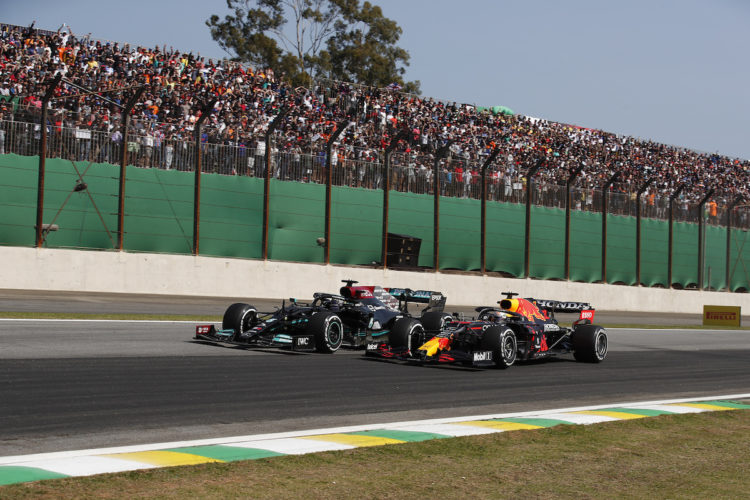 The on-track incident between Max Verstappen and Lewis Hamilton at the Brazilian Grand Prix will not be investigated further after Mercedes was denied a review of the episode.

At last week’s race, Hamilton was pushed off the circuit while battling title rival Verstappen for the lead of the race.

The race stewards noted the incident, before opting not to conduct an investigation into Verstappen’s defence.

Verstappen’s front-facing onboard was not available at the time, however after it was released, Mercedes filed its right of review.

The stewards outlined that Mercedes proposed that “the footage was relevant because it was the only footage that allowed the overall position of the cars, the steering inputs of the driver of Car 33 (Verstappen), the heading of the cars and the proximity of the cars to be analysed together”.

In the hearing, the previously unavailable footage was played, and Mercedes also presented the footage in a side-by-side comparison to the previous lap.

While the incident wasn’t placed under investigation during the race, the stewards state it would’ve been a different situation had Verstappen’s front-facing camera been available immediately after the close call: “At the time of the decision, the Stewards felt they had sufficient information to make a decision, which subsequently broadly aligned with the immediate post‐race comments of both drivers involved.

“Had they felt that the forward‐facing camera video from Car 33 was crucial in order to take a decision, they would simply have placed the incident under investigation – to be investigated after the race – and rendered a decision after this video was available.”

The stewards’ document added that it was determined that the footage “shows nothing exceptional that is particularly different from the other angles that were available to them at the time, or that particularly changes their decision that was based on the originally available footage”.

The stewards also drew an example from Austria 2020 when making their decision, when Hamilton was penalised for failing to slow for yellow flags during qualifying.

Hamilton originally escaped the matter without punishment, however after new camera shots were presented to the stewards, the seven-time world champion was issued a grid penalty.

Although the stewards say that the footage presented in both cases was “new”, it asserts that the material in the Brazil case it was not significant, compared to Austria when the footage “clearly showed that the yellow flag was visible from the car and the driver was penalized for failing to slow down”.