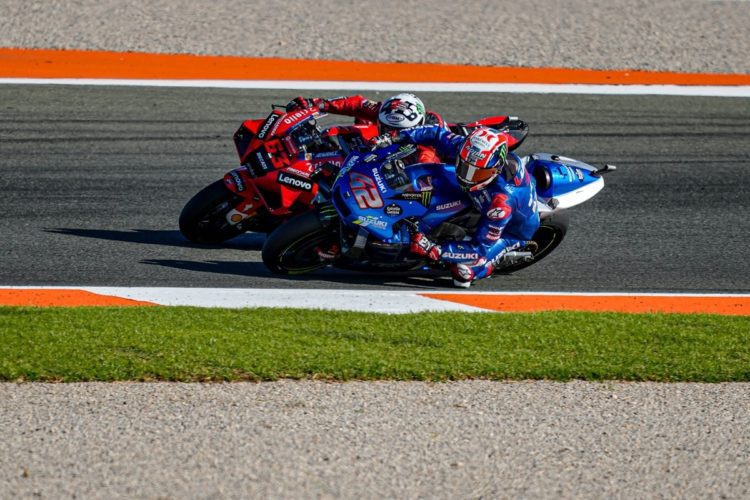 Alex Rins reckons he will be able to “ride better” in 2022 if Suzuki can bring improvements to its GSX-RR package, admitting he currently has to “ride at the limit.”

Suzuki endured a relatively tough 2021 season compared to its 2020 campaign that saw it score both the teams championship as well as the riders crown with Joan Mir, the Hamamatsu-based marque failing to win a race all year and finding itself well out of the mix for title glory as it was out-gunned in the development stakes by its rivals.

It was the last of the six manufacturers on the grid to introduce the innovative ride-height device that enhances both straight-line speed as well as standing starts, while it also failed to make much progress in other areas of its machine-seeing it fall behind the likes of Yamaha and Ducati in the competitive order.

Mir at least managed to salvage a strong third overall in his title defending season, though Rins ended up a lowly 13th having managed just a single rostrum result-a run to second at Silverstone-as well as six non-scores.

The Spaniard saw a potential podium finish in the season-ending Valencia Grand Prix vanish after going down from third after losing the front at Turn 6 just prior to mid-distance, leaving him “motivated” to find improvements for 2022 that will allow him to not have to ride “at the limit” to score a result.

“It was a very frustrating race because as everyone saw we were there fighting with Pecco (Bagnaia) and (Jorge) Martin, I was waiting,” said Rins.

“My strategy was to wait a little bit until the tyres started to drop a bit and then attack, I modified the line a bit of Turn 6 and I lost the front.

“It’s a big shame but now it’s time to focus on next year, in a couple of days we’ll head to Jerez to try the new bike, I’m not 100% on what we will have to try but the guys told me we have a lot of things to try so that is nice.

“For sure we’ll try a new engine and some new fairings, so I’m motivated to go there and prepare the bike for next year.

“I think if we can improve the bike I will ride better, at the moment we are riding at the limit of the Suzuki and so if we make a small mistake we crash so if we can make the bike better that’ll help a lot.”

Mir was left to cap his year off with a distant fourth place finish after falling away from the lead Ducati trio in the climatic stages of the encounter, admitting it was “impossible” to do anything about the flying Desmosedici’s at a track his scored his first-and so far only-premier class win last year.

The 2020 MotoGP world champion concurred with his team-mate that the upcoming Jerez test was “very important” to try and get the squad back in a position to challenge for wins and championships next season.

“They (Ducati) were faster, that’s it,” explained Mir.

“It’s frustrating because I gave everything all weekend to try and have a better end to the championship but it was impossible, so I’ll try again next year and I’m sorry to all the fans because I wanted to celebrate properly at the end of the season bit it was not possible.

“In any case I’ll sleep well tonight because I gave everything this year, it’s been a difficult one.

“We improved a lot in the last two races, that’s clear and if we could have had this potential for every weekend we could have made things a little more difficult for Fabio (Quartararo) but it was impossible to do anything more this weekend.

“The test is very important for everyone to understand the new things that Suzuki bring, they’ve worked hard all year to bring a good package for next season so we need to focus well to give 100% good information.

“It’s not about being fast, but just accurate information.”