Quartararo: Rossi ‘will be my idol forever’ 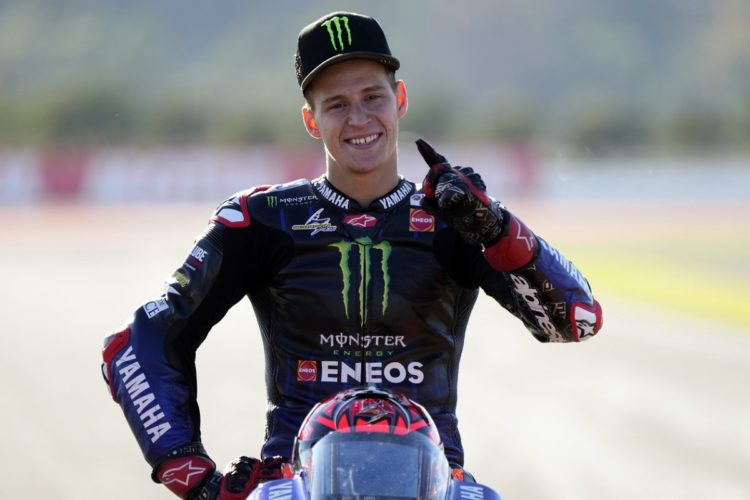 Fabio Quartararo says that Valentino Rossi “will be my idol forever” as the Italian waved goodbye to the MotoGP paddock following the Valencia Grand Prix for a career in cars.

The newly-crowned MotoGP world champion was able to celebrate with Rossi post-race, the Frenchman able to jump on the seven-time premier class champion’s first title-winning Yamaha machine to pose with a photo with him, a bike he says is the “first one I remember” that helped get him hooked on motorcycle racing.

Quartararo also added that the fact he had achieved his own ambitions of becoming world champion-an accolade scored with two races remaining at Misano three weeks ago-was slowly starting to sink in.

“It’s nice because as a rider you always dream of being world champion, for me the picture with the three world champions and tonight putting the plate on the trophy there are a lot of things that make you realise you actually are the world champion,” said Quartararo.

“He (Valentino Rossi) is my idol and it was really special (celebrating with him) and just after the race we had a picture with the Yamaha riders and I had the chance to jump on the 2005 or 2004 bike which is the first one I remember as a kid.

“It was super fun because he’s a legend of the sport, and he will be my idol forever.”

Quartararo and Yamaha suffered a rather below-par final couple races of the year after lacking outright speed in qualifying, the eight-time MotoGP race victor managing only seventh and eighth on the grid for at Portimao and Valencia respectively.

His relatively-low starting positions only accentuated Yamaha’s current lack of power with its M1 machine, Quartararo struggling to make his way through the pack at the Algarve International Circuit before crashing from sixth, while he outright pace lacked at the Circuit Ricardo Tormo en-route to fifth.

Quartararo though was satisfied with his Valencia outing having been in a “bad situation” in Friday practice, though he was keen to see whether Yamaha had managed to bring more power for 2022 at the post-season Jerez test later this week.

“We were in a bad situation from Friday morning and we achieved a pretty great pace considering from Friday we have been struggling with the front tyres,” continued Quartararo.

“We were better in the warm-up but overall still struggling, so I wanted to have fun more than the result and I did so I’m happy even if it wasn’t the weekend I expected because in 2019 we were super strong, and today we were strong but not as much as I wanted.

“We have two days of testing (post season at Jerez) to enjoy and then working hard because we know how much Ducati have improved in the second half of the season.

“I’m excited to see if we have some more horsepower (on 2022 Yamaha) because this is what we really need on the bike to compete with them (Ducati) and to be honest its super important because we are having some trouble, a lot of weak points we need to improve so hopefully we can address that with the new bike.”