Lecuona ‘started to cry when I shut the visor’ 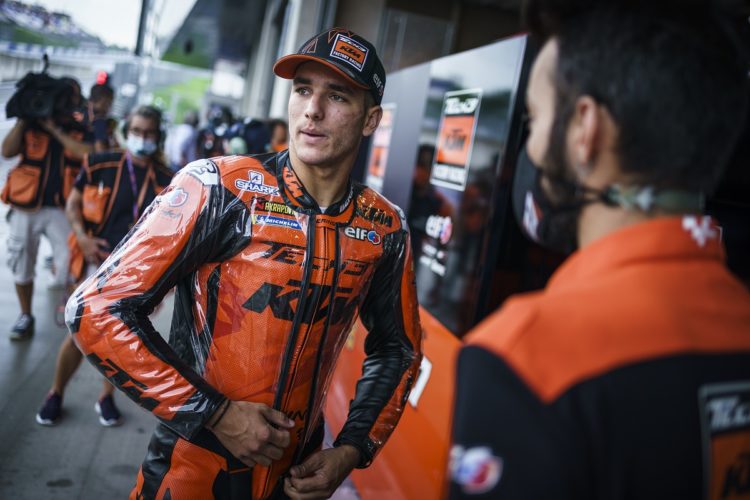 Iker Lecuona says he “started to cry” ahead of his final race in MotoGP in Valencia last weekend, admitting that “it’s tough to say goodbye to GP after two years.”

Lecuona-who competed with the Tech 3 KTM for both his full campaigns in the series-was dropped from KTM’s premier class roster for 2022 in favour of its Moto2 Ajo riders, namely newly-crowned intermediate class world champion Remy Gardner and rookie sensation Raul Fernandez.

The Andorra native found out he was out of the Austrian marque’s fold in devastating style mid-way through FP4 in Austria for the Styrian Grand Prix, leaving him with little hope of remaining in MotoGP and thus necessitating a move into the World Superbike Championship with Honda’s factory operation for 2022 instead.

Lecuona conceded that it was “difficult to manage” his final MotoGP encounter at the Circuit Ricardo Tormo due to going through “a lot of different feelings”, though he remained hopeful of a potential return to the championship in “three, four or five years” should his career trajectory offer him a future opportunity.

“It was difficult to manage the race as I had a lot of different feelings, when I shut the visor I started to cry so I needed three or four laps to focus, then I lost it again so it was difficult,” explained Lecuona.

“It’s tough to say goodbye to GP after only two years but on the other side I’m really happy to go to Honda in World Superbikes with the factory, so now I need to change my focus to superbikes.

“My career is still long because I’m young so I need to work, improve, enjoy and we’ll see after three, four or five years if I can come back or not.

“It was a difficult race for KTM but then we were not that far compared to other races, I was 15th and Miguel (Oliveira) was 14th and Brad (Binder) was seventh but our pace was similar because Brad was only two or three tenths faster than us.”

Lecuona added that he “enjoyed” working with similarly ousted Danilo Petrucci across their single season as team-mates at Tech 3 this season and that he was “happy” the Italian had managed to earn an opportunity to compete at the infamous Dakar Rally with KTM early next year.

He also revealed that he would sample his new Honda Fireblade superbike at Jerez next month, though he would wait until he had completed “two or three” tests before setting out targets for his maiden superbike campaign.

“With Danilo (Petrucci) the results were not really good because you need to fight with your team-mate, then after the summer we knew we weren’t going to continue with the team and the results improved a lot,” continued Lecuona.

“He’s a great guy and we’ve enjoyed (working together) a lot, we’ve had many joking moments in the box and said goodbye and good luck after the race.

“I’m really happy for him doing the Dakar and I think he can do really well.

“I think the first test (for Honda) will be in December at Jerez, I’m really happy for sure but for now I can’t expect to be in front because the bike and tyres are different so I need to work with the team and then we’ll see where we are after two or three tests.”

Lecuona leaves MotoGP having managed a best result of sixth in this year’s Austrian GP, while he achieved 20th-placed riders championship finishes in both 2021 and ’22, scoring 27 and 39 points across both campaigns respectively.