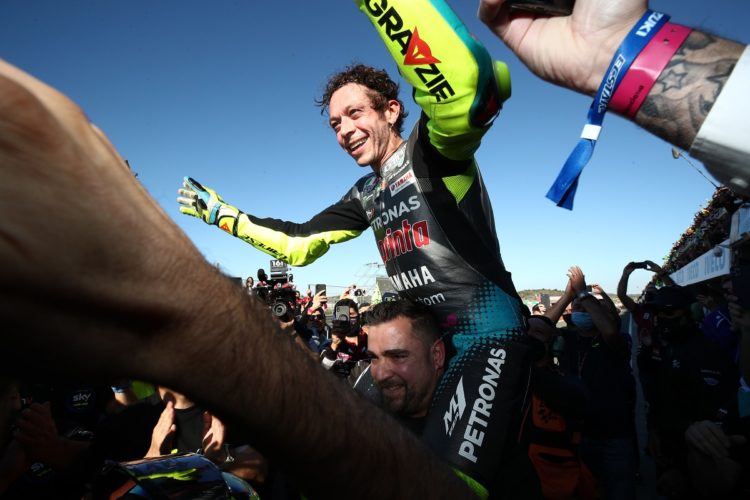 Valentino Rossi insisted “you cannot imagine the difference” in being able to leave MotoGP off the back of a strong result after managing tenth in the Valencia Grand Prix.

The seven-time premier class world champion hung up his rider leathers for good following the Ricardo Tormo outing after over two decades and a mammoth 372 race starts in the top category, Rossi enjoying a competitive event in Valencia as he qualified tenth on Saturday before holding his position in the race on Sunday.

His top ten run matched his second best result of what turned out be a challenging final campaign of MotoGP competition before switching to sportscar racing for 2022, Rossi ending 2021 with a total of four top ten results en-route to 18th in the rider’s standings.

Rossi admitted he “didn’t expect” to go out on such a strong note following his tough final album, leaving him satisfied that he could always look back and know he was “in a top ten with the best riders in the world” in his final premier class appearance.

“I’m very happy, I didn’t expect a weekend like this because it’s very emotional but I received a lot of surprises from Thursday with my (title winning) bikes and all the riders from the (VR46) academy using my helmets,” exclaimed Rossi shortly after taking the chequered flag for the final time in MotoGP.

“I received a lot of respect from the other MotoGP riders which was really special, and also I was strong and fast during the weekend and today was a very enjoyable race, the best way to finish.

“You cannot imagine the difference it makes (finishing top ten in last race) because I wanted to finish like this, top ten in qualifying and then top ten in the race.

“I am also in a top ten with the best riders in the world and this changes everything because this result will remain forever so I can say even in the last race I’m still in the top ten.”

Rossi conceded he was “scared” heading into the Valencia GP weekend that he “wouldn’t be able to do a good race” to wave goodbye to his loving supporters, adding that he was keen to not “give up” until the very end.

“I don’t want to give up to the end because when I’m slow and I suffer I feel really bad, I have a great team and we worked really well in the last part of the season and to finish in the top ten in Valencia is really special,” continued Rossi.

“Even from yesterday I felt good and could ride well, I was scared that I wouldn’t be able to do as good race or be competitive so this makes a big difference.”