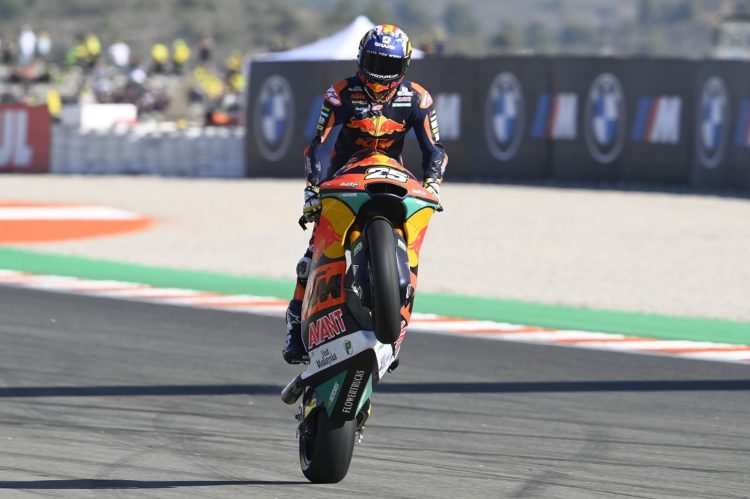 Raul Fernandez romped to an eighth Moto2 success of the year at Valencia, though team-mate Remy Gardner would take tenth to secure the 2021 intermediate class world title.

Fernandez managed to make a strong start initially to move into second behind pole-man Simone Corsi, though the race would be red flagged as a result of a crash between Marco Bezzecchi, Xavi Vierge and the other Forward MV Augusta machine of Lorenzo Baldassarri-oil being left strewn across the track at Turn 2 as a result.

All three riders escaped harm, though only Bezzecchi and Vierge were able to take part in the shortened 16-lap restarted sprint-the former from the back of grid after not escaping pit-lane in time as his bike was repaired.

Heartbreak was around the corner for Corsi though as he was forced to pull off into pit-lane before the race got underway once again with a mechanical problem, leaving Augusto Fernandez to lead the field into Turn 1.

Raul managed to quickly find his way into the lead though found himself unable to build any kind of advantage as Augusto counter-attacked, the two trading places several times before Gresini’s Fabio Di Gianantonio eventually passed the pair and established a lead.

Raul would stalk the Italian for the bulk of the contest before finally stealing the lead with a bold move at Turn 2 just three laps from home, the KTM Ajo man needing to win the race to have any chance of denying team-mate Gardner the title as he faced a 23-point deficit with just 25 in play.

Raul eased home to secure a record eighth victory for a rookie rider in Moto2, although his title hopes would finally be buried as Gardner cruised home in tenth to secure the 2021 championship by just a slender four markers ahead of the pair’s move to Tech 3’s MotoGP squad next season.

Di Gianantonio would end his final race in Moto2 on a strong note in second as he held off Marc VDS’ Augusto across the final few circulations, with Celestino Vietti and Aron Canet completing the top five.

Xavi Vierge managed to secure sixth in his final race before moving to Honda’s world superbike operation for 2022, with Sam Lowes ending the season with seventh at the Circuit Ricardo Tormo.

Jorge Navarro was eighth on his Boscoscuro Speed Up ahead of Marcel Schrotter, Gardner taking tenth after having to hold off Italtrans stand-in pilot Tetsuta Nagashima across the second half of the race.

Thomas Luthi was 12th in his final race, while Bezzecchi made his way up to 20th in the end.