Martin: ‘We have everything to win’ rookies title 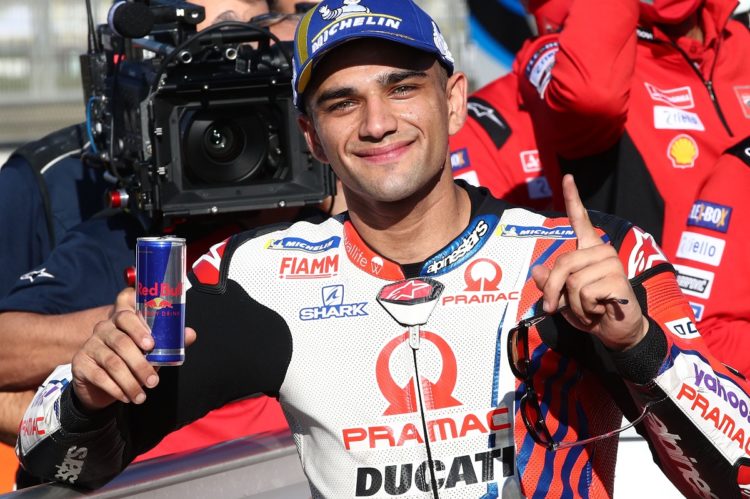 Jorge Martin reckons he has “everything to win” his tight rookie championship battle with Enea Bastianini after scoring pole for the Valencia Grand Prix.

The Pramac Ducati pilot heads into the final encounter of the 2021 MotoGP campaign just three points adrift of the Avintia rider in the rookies standings following the Italians recent charge, headlined by a pair of rostrums in the two Misano contests for the reigning Moto2 world champion despite having to campaign a 2019-spec Ducati machine.

Martin’s challenge meanwhile has been stymied by a total of eight non-scores across the 17 races contested so far-including four he was forced to miss through injury-compared to Bastianini’s four.

The 2018 Moto3 world champion managed to end Francesco Bagnaia’s five-event pole streak on Saturday at the Circuit Ricardo Tormo, his fourth and arguably most crucial of the year with Bastianini only able to manage a lowly 18th.

Martin was confident following qualifying that he would be able to get the job done on Sunday as he admitted he would attack from the off for a third rostrum of the year and that “just a top ten is not the target.”

“For sure we have everything to win (rookies title) for tomorrow, we just need to be focussed and finish the race, but also in a good way,” said Martin.

“Just a top ten is not the target for tomorrow, I will try my best and if something goes wrong it is what it is, but the important thing is that we are stronger.

“We will definitely go hard (compound) for the front (tyre) because even that is way too soft for this track, but for the rear is tough because I felt good with the medium and hard, there are strong and weak points with both tyres but I feel we can be ready for battle with either.”

Martin believes that any further improvement on his “almost perfect” pole gambit would have been “difficult” due to being “on the limit in every corner”, the Spaniard happy to continually find improvements with his Desmosedici across the weekend.

“I’m really happy with today, yesterday was already really good and normally we make a bigger step forward for Saturday, and we did this so we managed the pole position,” continued Martin.

“This lap was amazing and almost perfect, it was difficult to improve because I was on the limit in every corner so it’s amazing to do this in the last race of the season with a full crowd, I’ll try and focus for tomorrow as it will be a long race.”