Martin streaks to fourth MotoGP pole of 2021 at Valencia 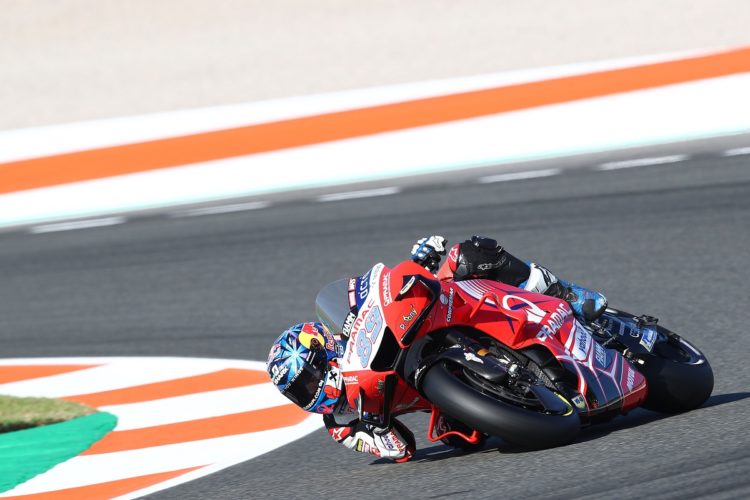 The session looked to be well under control by Ducati from the start as Jack Miller fired in the fastest lap of the weekend-a 1:30.325s-right off the bat, a time matched to the thousandth-of-a-second by Martin while Francesco Bagnaia ended up third just a further 0.015s behind.

Bagnaia quickly showed his intentions to score a sixth straight pole as he banged in a 1:30.118s on the first flyer of his last run, the Italian finding further time on his next effort as he recorded a 1:30.000s-though further improvement would be impossible after he lost the front of his Ducati at Turn 2 just moments later.

This left him under pressure from his Ducati brethren, Martin finding fractions in each sector en-route to a blistering 1:29.936s to snatch away provisional pole, though Miller looked to be on a mission just seconds behind.

The Aussie’s chances would go up in smoke as he tried to carry a smidge too much speed into the Turn 11 hairpin, Miller dropping his Desmosedici mid-corner and thus guaranteeing Martin a fourth pole of his rookie MotoGP campaign.

Bagnaia would hang onto second ahead of Miller to give the factory Ducati outfit the best chance to wrap up the teams championship on Sunday afternoon, the red rockets locking out the front row.

Joan Mir was the best of the rest on his Suzuki in fourth ahead of Johann Zarco on the second Pramac Ducati, while Alex Rins followed close behind in sixth having progressed through Q1.

Brad Binder joined the Spaniard in graduating from the opening qualifying segment to grab seventh on the grid for KTM ahead of world champion Fabio Quartararo, the Yamaha pilot once again struggling for outright speed this weekend.

Takaaki Nakagami was the sole Honda out in Q2, with ninth his reward, while Rossi would complete the top ten in his final MotoGP qualifying session.

Franco Morbidelli was 11th on the other factory Yamaha, while FP3 leader Aleix Espargaro failed to match his early morning speed as he could only manage 12th.

Andrea Dovizioso was the man to miss out on Q2 to Binder, the Petronas SRT pilot missing just 0.071s to the South African, though 13th is still his best result in qualifying since joining the Malaysian organisation earlier this year.

Tech 3 KTM pair Iker Lecuona and Danilo Petrucci will line up 15th and 16th in their own respective final MotoGP contests, while Alex Marquez failed to match the speed of LCR team-mate Nakagami down in 19th, Miguel Oliveira completing the grid.

Pol Espargaro failed to take part in qualifying following his nasty FP3 shunt, the Spaniard thankfully escaping serious injury though elected to miss the remaining Saturday action with a view to rejoining the fray on Sunday, though this meant the factory Honda operation had to miss the session entirely due to the absence of Marc Marquez.