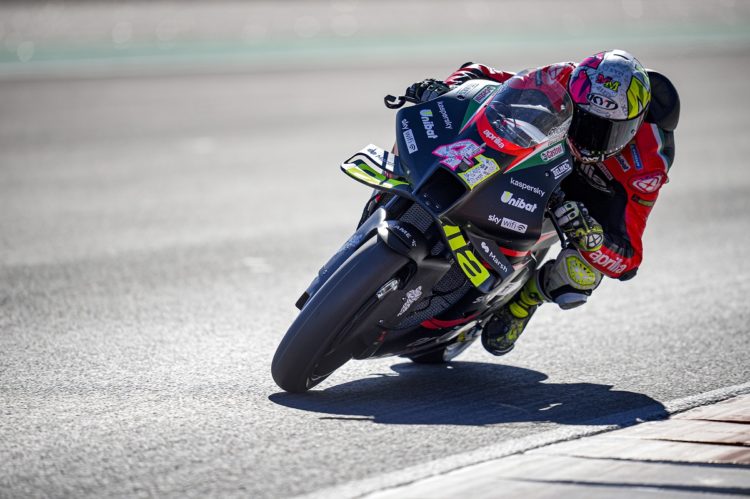 Aleix Espargaro batted away his and Aprilia’s tough Friday at the Valencia Grand Prix to top FP3, the Spaniard bagging the first automatic pole shootout spot.

Following several set-up tweaks overnight after suffering for speed on Friday at the Ricardo Tormo circuit Espargaro was on a mission right from the early goings on Saturday morning as he led the way with a 1:31.405s ahead of LCR’s Takaaki Nakagami, though he would soon post a strong 1:30.951s tour that left him third in the combined standings.

The dry conditions that graced the Spanish venue meant that continual improvements were possible throughout the test, with both Suzuki’s Joan Mir and Ducati’s Jack Miller taking opportunities to hit the front as the clock ticked on-the latter posting a storming 1:30.547s effort.

This was not destined to be enough for Miller to lead his second successive practice session though as Espargaro had a little more left in the tank, the Aprilia man guiding his RS-GP to a 1:30.529s time which would be enough to secure FP3 honours, with Miller just 0.017s further back.

Franco Morbidelli continued to show encouraging pace for Yamaha as he ended up third just ahead of Francesco Bagnaia, while Jorge Martin managed to get his Pramac Ducati directly into Q2 with a late improvement to fifth.

Mir was shuffled back to sixth in the end ahead of Nakagami, while Johann Zarco joined his rookie team-mate in scoring a pole shootout passage in eighth.

Fabio Quartararo barely clung on to ninth in a tense closing final segment of the session as his struggles to find a feeling with his title-winning M1 left him vulnerable, with the top ten being completed by Valentino Rossi-the Italian keen to go out on a high in his final premier class event.

Alex Rins was the unlucky man to miss out on a top ten covered by just 0.296s, the Suzuki ace lacking just 0.041s to Rossi to steal the final Q2 berth.

Brad Binder also just lacked enough to make it in with the 12th best time as the quickest KTM rider, while Pol Espargaro missed out on a chance to improve courtesy of a frightening Turn 13 crash.

Espargaro lost the rear of his Honda on entry to the fast Turn 13 left-hander and was flicked into the air, leaving him to slam hard onto the tarmac and subsequently to the gravel.

Visibly injured, Espargaro was soon stretchered away from the scene and taken to the medical centre for a check-up, putting doubt on his chances of making qualifying on Saturday afternoon.

Maverick Vinales was only 17th after at one point looking like he could join his team-mate in the top ten on his final tour, while Andrea Dovizioso ended up a disappointing 18th overall-six tenths adrift of Rossi-having finished Friday ninth on the timesheets.