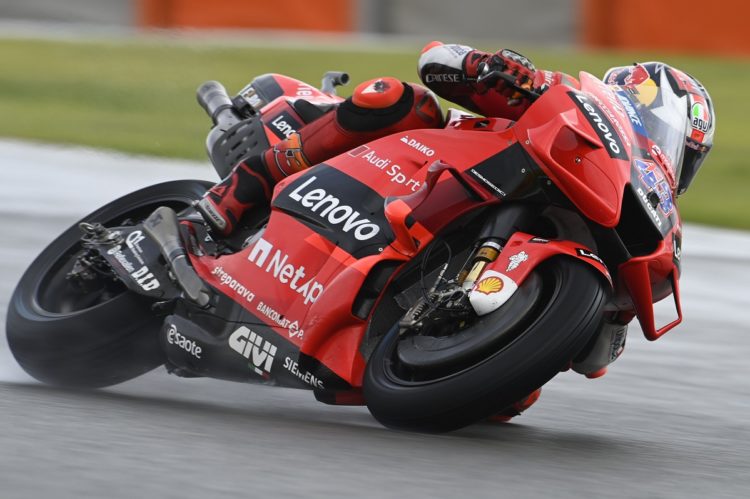 The final Friday practice session of the season started out pretty much bone-dry following a wet opening test of the weekend just hours earlier, allowing the riders to lap around six second per-lap faster immediately.

Times continued to drop throughout the session as the track rubbered in further and further, with a final qualifying-like shootout taking place in the closing minutes to decide a potentially crucial top ten if the rain makes another appearance on Saturday.

Miller ended up finding the most time on his final effort as he fired in a 1:30.927s to move ahead of Ducati team-mate Francesco Bagnaia, though the Italian would ultimately be shuffled back to third by the session’s conclusion by Espargaro.

The Spaniard looked good to further improve on his best lap on his final circulation, though asked a little too much from the front-tyre of his Honda and went down at Turn 6.

Alex Rins ended up fourth for Suzuki ahead of Pramac Racing’s Jorge Martin, while Takaaki Nakagami lifted himself well into the top ten in sixth with a late improvement of his own.

Joan Mir-who scored his one and only career MotoGP win at Valencia last year-ended Friday seventh ahead of KTM’s Brad Binder, while Andrea Dovizioso was a surprise ninth for Petronas SRT Yamaha having struggled for speed in recent races, the Italian only 0.670s adrift of Miller’s benchmark as the only Yamaha rider in the top ten.

Johann Zarco completed the ten that could possibly decide who heads directly to the pole shootout on Saturday afternoon, the Frenchman denying countryman and 2021 world champion Fabio Quartararo the spot by just over a tenth-of-a-second.

Franco Morbidelli held position at the head of the timesheets for a significant portion of the session before being shuffled to 13th by the end, while Alex Marquez struggled to match the speed of his fellow Honda pilot’s down in 14th.

Aprilia continued their recent raw speed deficit with Aleix Espargaro 12th ahead of team-mate Maverick Vinales in 18th, while Valentino Rossi’s final MotoGP weekend continued to look challenging as he ended the day 21st and last-albeit only 1.3 seconds from the ultimate pace.