Mir: ‘Everything came easy’ during Algarve return to form 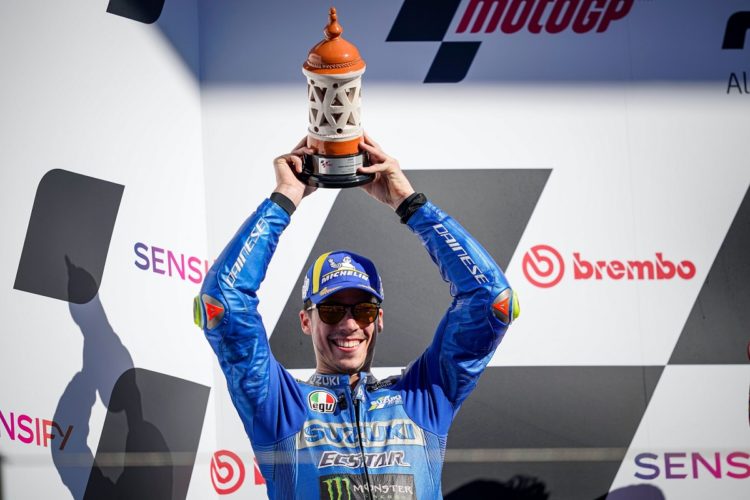 Joan Mir says “everything came easy” to him during the Algarve Grand Prix weekend, allowing him to score his first rostrum in nearly two months.

The Suzuki ace posted leading times across the second event of the year at the Algarve International Circuit, ending Friday practice in fourth overall before securing the first front-row qualifying result of his premier class career with third on Saturday.

A strong opening lap that saw him pass Jack Miller’s Ducati allowed him to become eventual race winner Francesco Bagnaia’s only realistic challenger as he stalked the Desmosedici across the opening half of the encounter, though the Italian would eventually gain the upper hand and edge away to a 2.4 second lead by the time the race was red flagged after 23 laps.

The outgoing MotoGP world champion was left “so happy” with his runner-up result despite being unable to grab his second premier class career win, Mir hailing his weekend as one he “needed” following a few tough events that Suzuki struggled to match the performance of the likes of Ducati, Yamaha and Honda.

“Honestly I’m so happy about this podium, though not more for the result but more about the overall weekend because I felt so good from the first moments,” said Mir.

“I was able to competitive from FP1, everything came easily and I needed a weekend like this with more normal weather conditions, thanks to the team for giving me the correct package to fight for the pole position and the victory.

“Today Pecco (Bagnaia) was just better than me and he was able to ride in a more effective way because to be on that pace I was making more mistakes than him, he didn’t make one as I was waiting all race but it never came.

“Well done to him and his team, so we’ll see what we can do in Valencia.

“I’m optimistic going there because it’s a track I’m normally strong at, this package we currently have is better than we had mid-season so I think I’ll be able to fight up front.”

Mir’s run to second ensured that he secured third in the overall riders standings as he now holds a 30 point advantage over fourth placed Miller with only 25 left to play for at the season finale in Valencia this weekend, though his 32 marker deficit to Bagnaia means he now cannot fight for the vice-champion position.

Suzuki also will not be able to defend its team title it scored last year alongside Mir’s riders championship due to a 98-point gap to current leaders Ducati, leaving it to try and hang onto third ahead of Pramac Racing, while Honda also have a slim chance of grabbing third from the Hamamatsu-based marque.