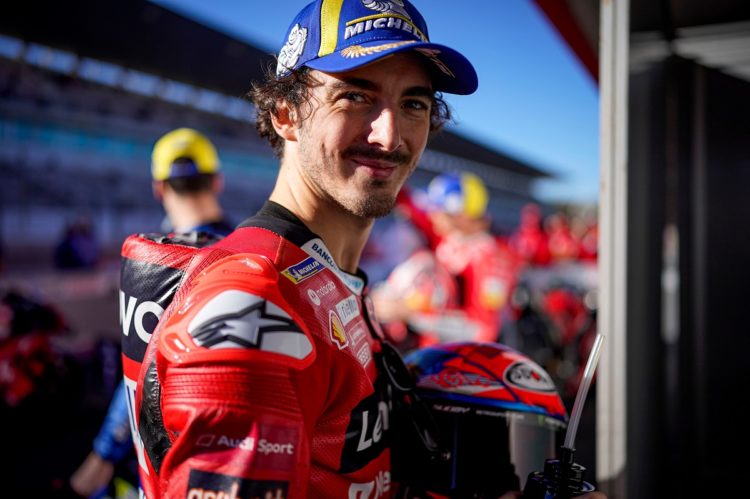 Francesco Bagnaia says he is “very satisfied” to have successfully navigated what he reckons is his “best weekend in MotoGP” to date after dominating the Algarve Grand Prix.

The Ducati rider bounced back impeccably after throwing away his title hopes by crashing from the lead at Misano two weeks ago, scoring his fifth successive pole at the Algarve International Circuit before leading every tour en-route to a 2.4 second success by the time the race was red flagged after 23 laps.

Bagnaia believes his Portuguese performance was his “best” overall weekend display in the premier class so far, the Italian happy with the work completed since finishing a distant second to Fabio Quartararo at the venue during the Portuguese GP earlier in the season.

“I’m very happy because I think this was my best weekend in MotoGP, I enjoyed every single session this weekend because when you feel so great with your bike everything comes more easy,” said Bagnaia.

“This race was maybe more difficult at the start because I was struggling with the front tyre a bit more compared to most races, so at the start I was trying to push but everytime I was leaning to the left I could feel the front was closing but every lap the feeling got better and better so I’m glad to have won this race.

“It’s also great to have won the constructors championship, it’s a great thing.”

The now three-time premier class race victor says his path to success wasn’t as easy as it looked after making a poor initial start-forcing him to pull off a cutback move on team-mate Jack Miller- while Joan Mir pushed him hard as he struggled to trust his front tyre in the early tours.

Bagnaia also made it clear that he wasn’t thinking about what could have been in points terms had he not crashed at Misano, with Quartararo’s first DNF of the year at Portimao theoretically meaning he would have entered the season finale just nine markers adrift-stating that the Frenchman “was finishing” the Algarve race had he got the job done in San Marino.

“I didn’t make a good start today, I don’t know why but in the first phase of the start I lost a bit of acceleration so Jack (Miller) was in front, so I braked so hard to cross him back over to overtake him quickly which I could do,” continued Bagnaia.

“It was difficult because Joan (Mir) in the first part of the race was strong, my objective was to be perfect every single lap and the pace was incredible.

“I was expecting a pace like this, we were really strong and we worked really hard all season to create a great base for next year, the bike feels incredible so I feel I’m in my best moment in MotoGP.

“I’m sure that if I won at Misano, he (Quartararo) was finishing the race, it’s correct that he won the championship because he’s more deserving than me so it’s ended up the correct way.”