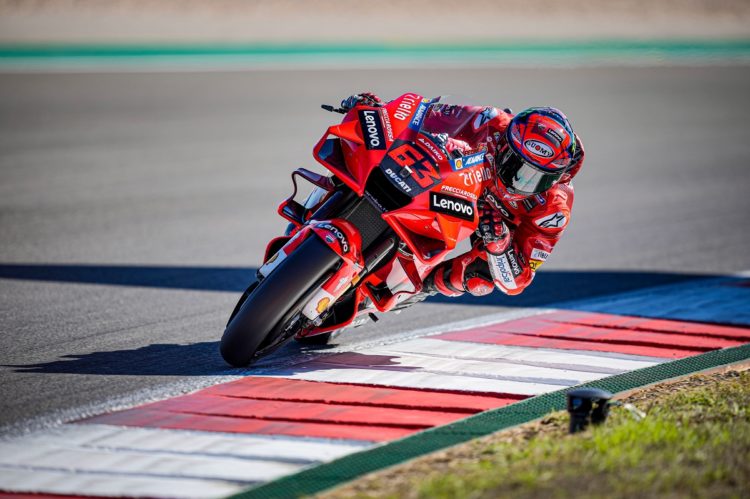 Francesco Bagnaia put on a clinic of consistency to romp to victory in the Algarve Grand Prix, taking the chequered flag 2.4 seconds clear of Joan Mir.

The Ducati rider made a good start from pole to lead the field into Turn 1 ahead of team-mate Jack Miller, though his only real challenge would come from Suzuki’s Mir.

The 2020 MotoGP world champion managed to put a move on Miller to take second half-way round the opening tour, Mir pressuring Bagnaia across the opening third of the encounter as they lapped within fractions of one another.

Mir found himself unable to mount an attack on the Italian though and eventually started to drop back, allowing Bagnaia to control proceedings across the remaining laps before the race was red flagged three laps from home due to an incident between Iker Lecuona and Miguel Oliveira.

Lecuona attempted to dive through on his fellow KTM rider for ninth at Turn 13 as the race entered its climactic moments, though the Andorran lost the front of his RC16 and bowled out home hero Oliveira-and with Oliveira having to be stretchered away the race was brought to a premature end, though luckily shortly after the race was called both riders were confirmed as being conscious.

The races early bath meant Bagnaia was classified 2.4 seconds ahead of Mir, while Miller managed to get the better of Alex Marquez in the battle for the final rostrum position.

The Aussie had held the place for the bulk of the race before Marquez passed him at mid-distance, though the LCR Honda man later started to struggle with tyre woes and dropped back behind the Ducati.

Miller then started to run into tyre problems of his own in the closing laps and thus allowed Marquez to range back onto the rear of him, though the red flag ultimately took away any chances of the two-time premier class podium finisher grabbing his first rostrum of the term.

Fifth went the way of Johann Zarco after passing team-mate Jorge Martin towards the end, the Pramac rookie eventually being classified seventh after also losing out to Honda’s Pol Espargaro after hitting tyre trouble.

Alex Rins just ran out of time to also overtake Martin and therefore had to make do with eighth on the other Suzuki ahead of Avintia’s Enea Bastianini, while KTM’s Brad Binder completed the top ten.

Newly-crowned MotoGP world champion Fabio Quartararo saw his race come to an end after out-braking himself into Turn 5 while trying to make his way past the Pramac pair, the Frenchman’s underpowered Yamaha making life tough as he struggled to recover from seventh on the grid despite showing speed similar to that of Bagnaia when in clean air.

Quartararo’s early exit also meant that Ducati wrapped up the manufacturers championship with a round to spare, while the Bologna-based marque also re-took the initiative in the teams standings with its 1-3 result compared with Yamaha’s non-score after Franco Morbidelli struggled to 17th.

Takaaki Nakagami meanwhile scored 11th after starting from 22nd and last on the grid, while both Petronas SRT Yamaha’s also picked up points, Valentino Rossi claiming 13th ahead of team-mate Andrea Dovizioso in 14th.

Aprilia endured a tough Portuguese outing after Maverick Vinales failed to score in 16th after dropping to the back off the start, while Aleix Espargaro crashed at Turn 1 early on-joining Danilo Petrucci on the side-lines after the Tech 3 pilot went down on the opening circulation.