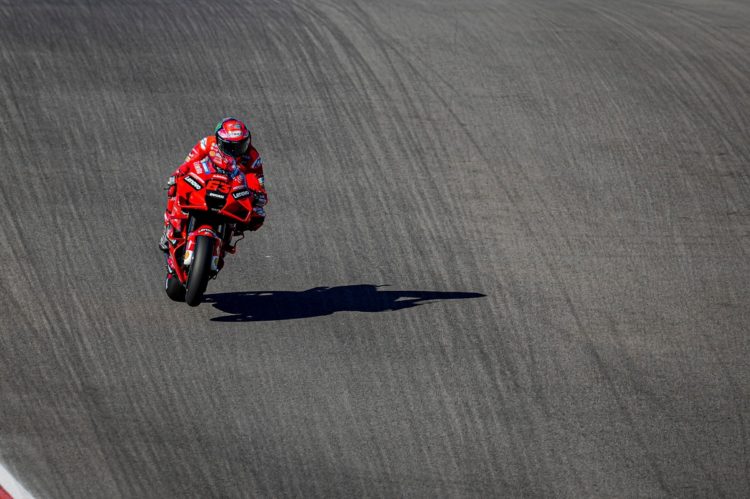 Francesco Bagnaia launched to his fifth successive MotoGP pole in qualifying for the Algarve Grand Prix at the Algarve International Circuit as Fabio Quartararo could only manage seventh.

A frenetic battle for pole was expected between Bagnaia and Quartararo with the duo having set the pace all weekend, the pair having been separated by fractions across all four practice sessions leading into qualifying on Saturday afternoon.

Both suffered setbacks early on in the pole shootout though as Bagnaia could manage only the fourth quickest effort, while Quartararo saw his best time deleted having gone faster under yellow flag conditions through the final split, leaving the freshly-crowned MotoGP world champion only ninth.

The duo were keen to make up lost ground as the final crucial runs got underway, Bagnaia firing himself to the head of the standings with a record-breaking opening gambit-a 1:38.775s-though Quartararo could only progress a couple positions further up the grid to seventh.

Bagnaia managed to find even further improvement on his last attempt to post a 1:38.725s, a time ultimately enough to seal his fifth pole in a row and sixth of the season in total.

Ducati team-mate Jack Miller once again showed up when it mattered in qualifying to grab second having led the way in the opening runs, the Aussie heading Suzuki’s Joan Mir by just over half-a-tenth as the outgoing champion completed the front row.

Jorge Martin took a sensational fourth on the grid at the track he suffered his frightening crash earlier in the year that forced him to miss several encounters, his Pramac Ducati team-mate Johann Zarco slotting in just behind having progressed from Q1 minutes earlier.

Pol Espargaro upheld Honda’s honour with a solid run to sixth ahead of Quartararo, who failed to capture the blistering performance he had shown all weekend as he lapped a distant 0.406s adrift of erstwhile title rival Bagnaia.

Alex Marquez was eighth on his LCR Honda machine ahead of Franco Morbidelli, while Q1 graduate Iker Lecuona was an impressive tenth for Tech 3 as by far the highest-placed KTM runner.

Alex Rins could only manage 11th on the other Suzuki, while an early crash failed to help Luca Marini’s cause for a second straight top ten grid spot en-route to 12th.

Avintia team-mate Enea Bastianini was the man to just miss out on the pole shootout in 13th overall, the two-time premier class rostrum finisher lapping just over a tenth slower than second-placed Lecuona, while Aleix Espargaro was the top Aprilia entrant in 14th a further tenth back.

Valentino Rossi managed a solid 16th as he continues to make ground across the weekend as the first of the Petronas SRT’s Yamaha bikes, the seven-time premier class champion narrowly heading the lead factory KTM pilot of Miguel Oliveira.

The home hero’s team-mate Brad Binder could only muster up 19th, a tough day once again for the factory RC16’s as the satellite Tech 3-run entries outran them comprehensively.

Stefan Bradl will start 20th as the injured Marc Marquez’s replacement, while Takaaki Nakagami had  a session to forget after crashing out on his final run-meaning he dropped all the way to 22nd and last by the time Q1 came to an end.