Quartararo sweeps Friday as he tops FP2 in Portimao 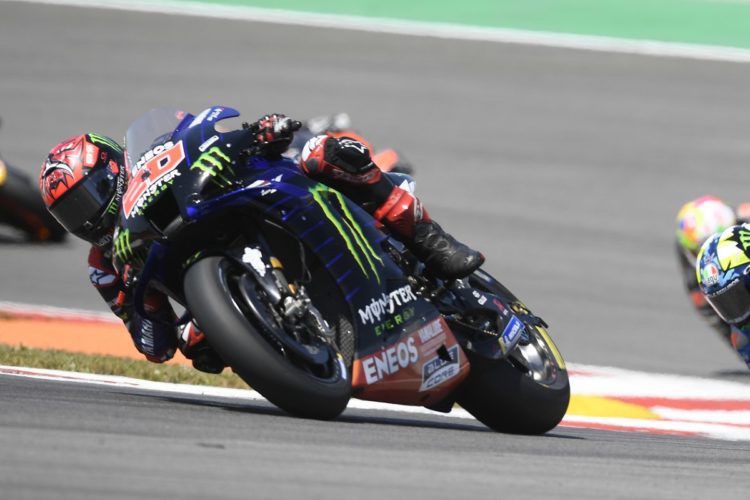 Fabio Quartararo made it two from two as he led the way in FP2 for the Algarve Grand Prix at the Algarve International Circuit ahead of Ducati’s Francesco Bagnaia.

Quartararo fired out the gates on Friday afternoon with the same gusto that put him atop the timesheets in the morning session, the 2021 MotoGP world champion posting a 1:40.355s early on to lead Bagnaia and the LCR Honda pair of Alex Marquez and Takaaki Nakagami.

The times continued to drop throughout the test as track conditions improved, Quartararo and Bagnaia trading fastest times at the top before Suzuki’s Joan Mir managed to briefly head the way as the clock ticked down.

Quartararo would later bang in a 1:39.390s to regain the top spot, a time that would ultimately see him lead the 22-strong field at the end of Friday running by just 0.132s over Bagnaia.

Johann Zarco enjoyed a stronger afternoon for Pramac Ducati en-route to sixth at the end of the day ahead of Marquez, while Aprilia’s Aleix Espargaro was eighth.

Nakagami ended up ninth overall while the other Suzuki GSX-RR of Alex Rins rounded out the top ten, just clear of Jorge Martin who continued to shake off the demons of his accident at the Portuguese venue that forced him out for several races earlier in the year.

KTM continued to lack speed throughout in the afternoon session as it had in the morning, Tech 3’s Danilo Petrucci the fastest RC16 down in 13th, while factory men Brad Binder and Miguel Oliveira could muster up only 17th and 19th respectively on their factory-prepared RC16’s.

Petronas SRT’s 2021 struggles continued in Portugal as it propped up the timesheets with its two satellite-Yamaha’s, Valentino Rossi edging team-mate Andrea Dovizioso for 21st by a slender 0.040s.