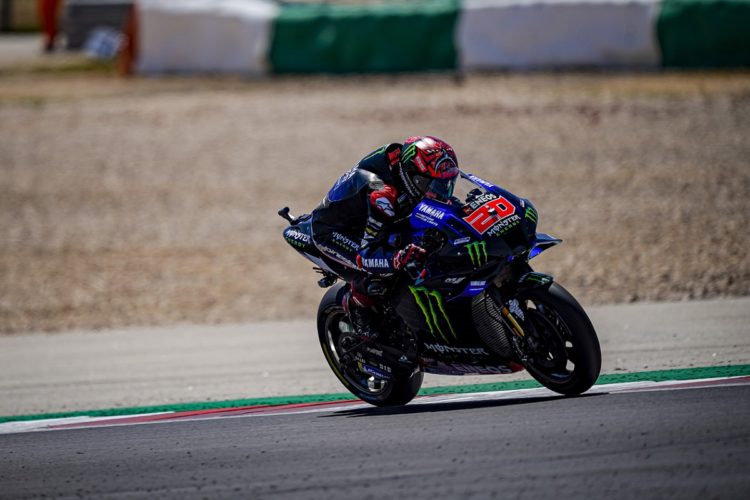 Fabio Quartararo topped the opening practice session for the Algarve Grand Prix after sneaking ahead of Francesco Bagnaia at the death.

The newly-crowned MotoGP world champion tussled with erstwhile title rival Bagnaia for the top spot throughout the 45-minute test, the latter eventually getting the upper hand with a 1:40.927s tour just clear of the Yamaha racer and Honda’s Pol Espargaro.

Quartararo would later hit back to move back into the lead by just 0.028s as the session entered its closing stages, though Bagnaia would once again dump the Frenchman back to the runners-up place with a storming 1:40.237s, a time that looked to ensure him the plaudits in FP1.

Quartararo still had a little left in the tank though as he headed out for a final three-lap push as the clock ticked down, his third lap being the charm as he took the chequered flag to snatch back the top spot by just 0.045s ahead of the Ducati pilot.

Jack Miller ended up third on the second factory Ducati machine ahead of Suzuki duo Alex Rins and Joan Mir, while Luca Marini was an impressive sixth on his Avintia-run Desmosedici despite losing an even better tour after running wide on his final attempt.

Espargaro ended up seventh ahead of Aprilia’s Maverick Vinales, while Franco Morbidelli found himself shuffled back to ninth having run within the top three towards the end of the test on the other factory Yamaha M1, the Italian just clear of Aleix Espargaro who completed the top ten.

LCR Honda duo just missed out on the top ten with Alex Marquez leading Takaaki Nakagami in 11th and 12th respectively, while KTM once again found the goings tough.

Iker Lecuona ended up as the Austrian marque’s highest-placed rider in 14th on his Tech 3-prepared RC16 just ahead of factory man Brad Binder, while 2020 Portimao victor and home hero Miguel Oliveira could manage only 17th on the timesheets.

Andrea Dovizioso was the quickest of the Petronas SRT Yamaha’s-albeit down in 19th-with team-mate Valentino Rossi propping up the table in 22nd and last, just behind the injured Marc Marquez’s temporary replacement Stefan Bradl in the factory Honda stable.