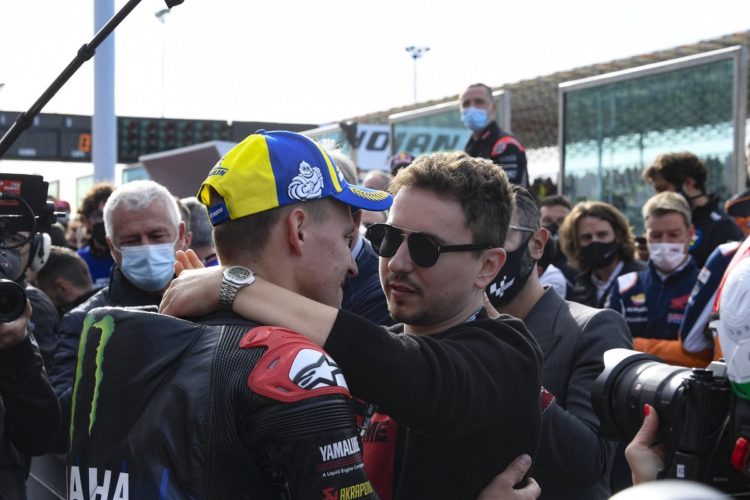 The Japanese marque suffered a challenging 2020 term after having to run the engines in their M1’s at a lower power output due to reliability concerns following multiple failures early in the year, while problems getting the newer machine to work in the cooler conditions seen towards the end of the year meant only Franco Morbidelli on a 2019-spec bike was able to be consistently competitive.

Yamaha’s 2021 M1 displayed clear improvements out the gate at the start of the year with as it dominated the season-opening Qatar double-header with Maverick Vinales and Quartararo sharing wins, with four further wins coming courtesy of the Frenchman en-route to the title.

Lorenzo reckons Yamaha’s success is “deserved because they have worked a lot”, adding that the brand “means a lot to me” after the success he scored with the manufacturer before expressing how impressed he was with the level of improvement displayed by the new world champion since his premier class debut in 2019.

“Yamaha means a lot to me because the only three world titles that I got were with them, so I will always be remembered as a Yamaha rider but they are a family, they are very loyal and always give you confidence in the hardest times,” said Lorenzo at Misano.

“It’s deserved for Yamaha because they have always worked a lot, and nobody expected when Fabio (Quartararo) arrived with Petronas (SRT) in 2019 that he would be so competitive and then world champion.

“People thought that in Moto2 he wasn’t very competitive, that he was a talented rider but not very consistent but little by little he improved every year and he changed a lot compared to last season, he never made mistakes.

“You cannot win every race in a MotoGP championship, you always find a track that doesn’t work for you or for the bike, and in that case you need to finish the race and cannot crash.

“It doesn’t matter the position, you have to finish and that’s what Fabio did all season and because of that he is now world champion.”

Lorenzo added Quartararo likely “got a surprise” by securing the championship at Misano as he was “expecting more for Portimao”, the eight-time premier class race winner doing well to temper expectation as Yamaha struggled in the mixed conditions according to the Mallorcan.

“I don’t think he expected that today he would become world champion, it was a possibility of course because crashes can always happen and in the end it did happen to Pecco (Bagnaia), but he was expecting it more for Portimao, so he got a surprise,” continued Lorenzo.

“Pecco has been very strong in the last four or five races, he has always been on pole position and almost always winning so for sure this put a bit of extra pressure on Fabio because little by little his gap in the championship was reduced.

“With Pecco on pole and him 15th they were tough circumstances but he never stressed and lost his mind, little by little he recovered positions and he was lucky that Pecco crashed.”

Lorenzo also refused to rule out potentially taking on a greater role within the MotoGP paddock in future having only attended as a spectator since retiring from racing at the end of 2019, leaving the door open “to some kind of job here in the future.”

“Maybe this could happen in the future (return to MotoGP paddock as team member), I will always stay here as it’s my passion and I love to see the new generations coming through and seeing which new young rider will be the new star as well as seeing people that I know,” said Lorenzo.

“So certainly as a spectator I will come, and we’ll see if I have some kind of job here in the future.”