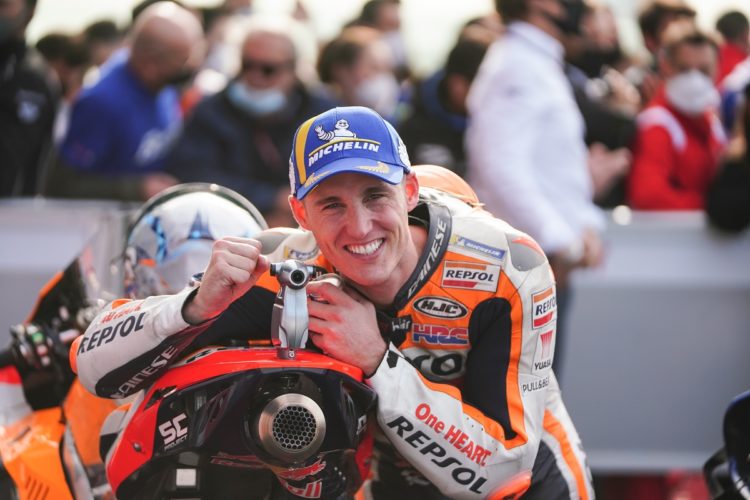 Pol Espargaro says he is relieved to finally achieve his first podium finish for the factory Honda squad following a “tough season” with a “lot of ups-and-downs.”

The Spaniard had only managed to achieve a single top five result-a run to fifth after starting on pole at Silverstone- in the opening 14 races of 2021 since switching to the Japanese marque from KTM for this season, Espargaro struggling to find a good feeling with the RC213-V on anything other than cooler track temperatures.

With rain affecting the bulk of the Emilia Romagna Grand Prix weekend and the cooler climactic conditions remaining despite the sun coming out for race-day, Espargaro was able to run fourth in the early stages-which soon became third after Jack Miller crashed out a few laps later.

He would ultimately complete Honda’s first 1-2 finish since the 2017 Aragon GP behind Marc Marquez after Francesco Bagnaia crashed from the lead just half-a-dozen laps from home, though he admitted the latter stages of the contest were “stressful” after seeing several riders crash out.

“It’s taken a little too much time to arrive (on the podium) but it feels so good after a tough season, we’ve had a lot of up-and-downs,” explained Espargaro.

“I didn’t give up and was pushing so much all year to try and get results, and to get here with the best result of my MotoGP career with a Honda is incredible, but especially for the team and to get a 1-2 in one of the toughest years for Honda in its history feels so good.

“I was pleased with the podium position and then I saw the guys crashing which was a bit stressful, but in the end everything went good and I’m super pleased.

“I knew I had a good rhythm and knew I could do a really fast race because in the test I was fast, but the problem is I am not able to overtake on a full tank in the opening laps as easy as Marc (Marquez) can because he knows the bike much better than me and the limit, I don’t want to make a mistake at the start because this is the worst thing that can happen.

“I was behind Miguel (Oliveira) and I could see the guys pushing and I thought no way, they were going so fast and making a gap to Miguel and I was right behind, I knew I was faster but couldn’t overtake and I took too long.

“By the time I overtook him it was too late and they pulled out 1.5 or 2 seconds that I couldn’t recover so then I focussed on myself to try and set a rhythm.”

Espargaro hailed his best ever MotoGP result as one of the “most important” moments of his career, affirming that he had set “such high targets” for himself and knowing he has “no excuses and you need to perform.”

“These moments at the end are the most important in the career of a rider, especially after a huge change in my career with such high targets because of going to one of the best teams in the world and history, with everyone looking at you and what you can achieve in those colours,” continued Espargaro.

“You have no excuses and you need to perform, and when you don’t perform you have more fingers pointing at you and then to get over that is difficult but in the end the hard work has paid off and I will keep working, I want to be here many more times so it’s important to keep working.”