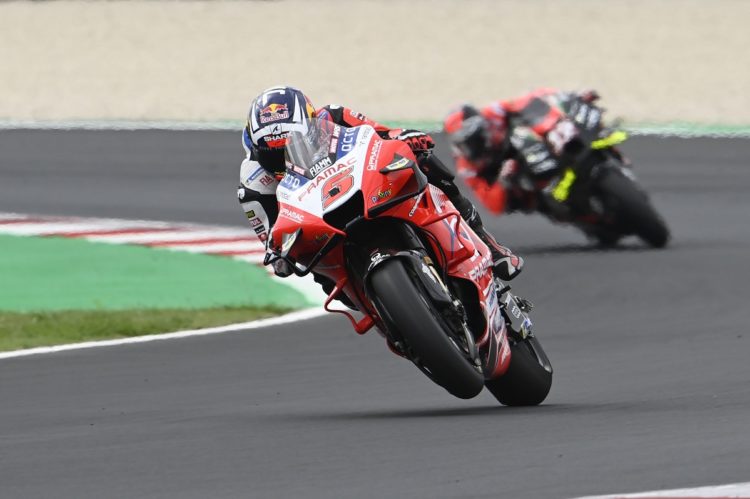 Johann Zarco led the way in a soaking opening practice session for the Emilia Romagna Grand Prix at Misano as title contender Francesco Bagnaia crashed in the tricky conditions.

The test began on a wet track thanks to an earlier rain shower, though most of the riders headed out straight away with inclement weather expected to remain throughout Friday and Saturday.

Another shower though would cause the conditions to worsen around a third of the way through, meaning the bulk of the field returned to the pits as the track got all the more treacherous.

Unsurprisingly it was the Ducati of Jack Miller that led the way prior to the secondary rain shower ahead of team-mate Bagnaia, while KTM’s Miguel Oliveira had managed to post the third quickest effort.

Track activity began to pick up again heading into the final ten minutes as the rain dissipated and the track began to afford the competitors more grip, Pramac’s Zarco the man to really get a feel for the conditions as he fired himself to the top of the times with a 1:43.836s.

The two-time Moto2 world champion was unmatched across the remaining minutes as he relentlessly cut down his times, his final effort as the flag dropped of a 1:42.374s leaving him a commanding 1.417s clear of Honda’s Marc Marquez.

Miller slipped to third by the end just ahead of the other Pramac Desmosedici of Jorge Martin, while Franco Morbidelli completed the top five on the first of the factory Yamaha’s.

Bagnaia ultimately was forced to make do with sixth in FP1 after crashing at Turn 8 late on, the Italian tucking the front of his machine on entry to the left-hander as he pushed hard to try and find further time gain-though he luckily walked away unharmed.

Series leader Fabio Quartararo took it cautiously throughout the session as he ended up down in 18th just behind the returning Maverick Vinales’ Aprilia.

Two other riders also fell victim to the conditions throughout the test, with LCR Honda’s Alex Marquez and Brad Binder both going down at Turns 2 and 8 respectively just seconds apart in the early goings-the duo ending up 14th and 23rd overall respectively.