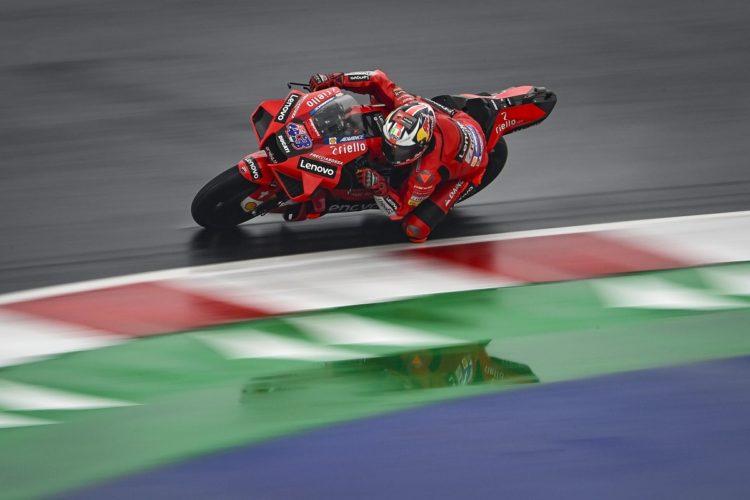 The second and final practice test of the day started out significantly drier than it had been at the conclusion of FP1 on Friday morning, the bulk of the field quickly improving on their best efforts from the opening session as the Misano venue began to slowly dry.

By the end of the session a clear dry line had started to emerge, with many riders continuing to improve as they took the chequered flag.

Miller’s benchmark of 1:41.305s set much earlier though would ultimately prove to be a bridge too far for anyone to match, the Ducati ace 0.927s clear of Zarco in the end as Ducati once again looked formidable in wet conditions.

Aleix Espargaro was a strong third for Aprilia at the end of Friday as one of the riders to utilise the drying track to improve his best effort as the clock ticked down to zero, with Tech 3’s Iker Lecuona backing up his top ten run from FP1 to end up fourth overall.

Miguel Oliveira was fifth on his factory KTM RC16 ahead of Luca Marini, while wild-carding Aprilia ace Lorenzo Savadori once again showed his wet-weather prowess as he posted the seventh best time on his RS-GP.

Francesco Bagnaia escaped a scary moment as he braked on the still-wet kerbing on entry to Turn 4 as he tried to improve late on, leaving him eighth ahead of Danilo Petrucci and Jorge Martin, who ensured all four GP21 Ducati’s graced the top ten at the end of play.

Marc Marquez saw a strong final lap tail off en-route to 14th just behind fastest Honda and brother Alex Marquez in 13th, the pair just a matter of a few hundredths behind Joan Mir and Enea Bastianini who matched each others times to the thousandth.

Yamaha once again struggled when things got slippy, series leader Fabio Quartararo the fastest M1 all the way down in 16th ahead of team-mate Franco Morbidelli in 20th, while Petronas SRT duo Valentino Rossi and Andrea Dovizioso could claim only 22nd and 24th overall, just behind Maverick Vinales in 21st.