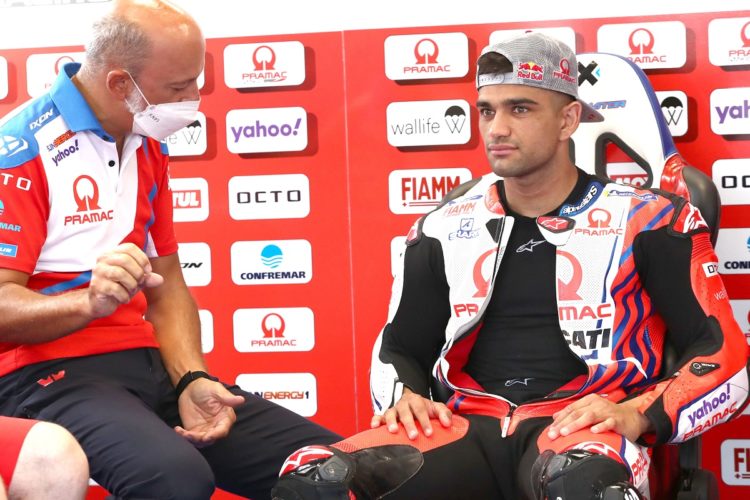 Jorge Martin says three-time MotoGP world champion Jorge Lorenzo stopped by to give him “advice” on how to improve his Ducati riding style ahead of the San Marino Grand Prix.

Martin has had an up-and-down rookie season in the premier class so far, the 2018 Moto3 world champion scoring an impressive debut rostrum in only his second start in Qatar before taking a first ever victory in the Austrian GP after the summer break.

He was however forced to miss four races following the Qatar encounters after suffering knee and ankle fractures in practice for the Portuguese GP, costing him crucial running time and thus leaving him 11th overall in the rider’s standings with four rounds remaining.

The Pramac Ducati pilot admitted though that he is still struggling to maintain over the race distance due to not optimising his riding style with the Desmosedici, an issue he says Lorenzo attempted to try and assist him with on Thursday ahead of the San Marino GP.

“He (Jorge Lorenzo) came to the box on Thursday to give me some advice about how to ride the Ducati better because he was quite competitive (riding Desmosedici,)” said Martin.

“I need to work more on my riding style because I still struggle physically over the race distance, but this weekend felt better than in Aragon so hopefully in the test we can do more laps and improve and be better prepared for Austin.

“It was a short race, though interesting because I felt quite good and it was the best part of the weekend for sure.”

The Spaniard never got the chance to try his style adjustments though after retiring from the Misano outing early as a result of an early crash while trying to pressure Yamaha’s Fabio Quartararo, the incident causing one of the aerodynamic appendages attatched to his Ducati to fall off and affect the balance of the machine.

Martin accepted that he was likely “too optimistic” while trying to attack the series leader, but reckoned he felt he could have run around the rostrum positions had the race gone to plan, the one-time race winner looking forward to the two-day Misano test in order to try and make further progress with his level of comfort on the bike.

“I lost some positions at the start but recovered them really fast, when I arrived to Fabio (Quartararo) he tried to keep the position and I was battling because I thought I had something else and could go forward,” explained Martin.

“I entered into the corner at the same speed and same lean angle and everything as the lap before but I crashed, for sure I improved a lot from Saturday so I was much faster at that corner.

“I was maybe too optimistic, but it’s OK and we’ll focus on the test and I think it’ll be important for me because it’ll be the first test since the Qatar one.

“It’s good because we can work differently than in the race weekend, so it could be useful and I think we can make a big step.

“It’s difficult to know (potential finishing position) because I was on the new tyre and felt great, and after the crash I lost a wing so it was quite difficult to make a good pace, I was doing low 1:33’s and I expected high 1:32’s so that wasn’t podium level, but you never know.

“Maybe I could have been with Jack (Miller) all the race and at the end been a bit faster, but we’ll find out next month when we come back here, it’s a great track and I was competitive all weekend so hopefully I’ll be even more competitive next time.”