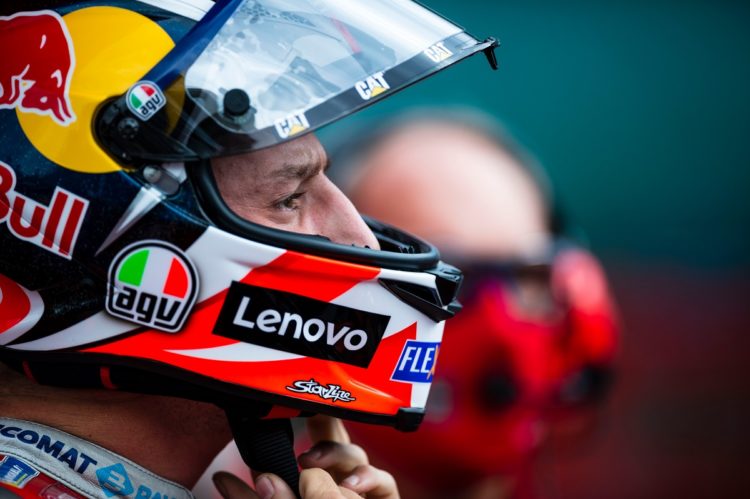 Jack Miller says a “frustrating” problem with the rear tyre on his Ducati caused him to fall from challenging for victory to fifth by the end of the encounter.

The factory Ducati pilot fended off a fast-starting Fabio Quartararo to hold second behind team-mate Francesco Bagnaia in the early stages of the San Marino Grand Prix, the Aussie lapping at the same pace of the leader and holding a constant 1.5 second gap to the Italian before making an error at Turn 13 at around a thirds-distance, dropping him three seconds behind and into the clutches of the pursuing Yamaha.

This mistake would ultimately prove to be a foreshadowing of Miller’s demise as his pace soon began to decrease further and further by the lap, first of all losing out to Quartararo before slipping to fourth behind a charging Enea Bastianini.

He would continue to struggle until the chequered flag as he was caught by Honda’s Marc Marquez and reigning MotoGP world champion Joan Mir at the start of the final tour, the three-time premier class race winner eventually losing out to both-though he would ultimately take fifth after Mir was docked a position for exceeding track limits on the final circulation.

Miller explained post-race that vibrations when on higher degrees on lean angle hinted his rear tyre was to blame for the problem, going on to describe how the rear of his Desmosedici continually began to slide around when he operated the rear brake, an issue that got “worse and worse” as the race progressed.

“The cause of my moment (running wide at Turn 13) was that I was starting to get some vibrations when on high lean angle, especially on that section of the track when you’re breaking while turning,” said Miller.

“When I used the rear brake that caused the bike to start sliding and the back to come around, and then this problem got worse and worse.

“I don’t have any reason or understanding for this problem and what caused it, it’s one of those things that’s out of our control and we can’t do anything about it.

“We work very hard as a team all weekend and so it’s to have things like this happen is not great because when you’re sat there with 15 laps to the end and you’ve used up all your options with the engine braking and power and trying to be as gentle as you can with the rear tyre.

Despite the problem that denied Miller a rostrum at Misano he affirmed the feeling he had managed to garner with his machine was “very good” and was satisfied with the speed he displayed in the opening stages of the race, the two-time 2021 victor reckoning he “deserved” to stand on the rostrum.

“The feeling of the weekend was very good and the feeling of the first eight or nine laps was really good, me and Pecco (Bagnaia) were setting a fantastic pace out front there and gapping everybody and then I just ran into a wall where I started suffering quite a lot,” added Miller.

“I’m happy with how we worked this weekend and how we performed in front of the home fans, it’s just a shame we’re not on the podium because after the work we put in we deserved to be up there.”