Dovizioso: ‘It was really strange to start 24th‘ 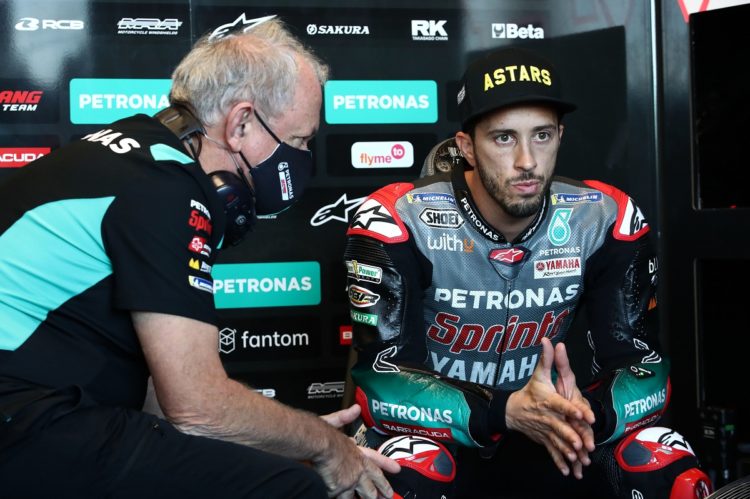 Andrea Dovizioso says he is “pretty satisfied” with his MotoGP comeback at Misano with the Petronas SRT Yamaha squad, though admitted “it was really strange to start 24th.”

Dovizioso started a MotoGP event for the first time since the 2020 finale at Valencia last November this weekend at the San Marino Grand Prix, the Italian drafted in for the rest of this season and 2022 to replace the departing Franco Morbidelli who had sealed a promotion to the factory Yamaha team following Maverick Vinales’ unexpected exit last month.

Having not ridden a Yamaha M1 since competing with the Tech 3 squad prior to joining Ducati back in 2012, Dovizioso was up against it as he tried to get comfortable with his new steed prior to Sunday’s race-Friday’s inclement weather not assisting his cause.

Unsurprisingly he qualified last on the grid, though he only lapped just over a second adrift of Q1 leader and eventual podium finisher Enea Bastianini and lined up just one place and just over a tenth behind team-mate Valentino Rossi.

He took the chequered flag as the final classified rider in 21st after receiving an early long-lap punishment, though did display encouraging speed in the latter stages as he lapped comparably to most of the top ten, the 14-time premier class race winner posting his fastest effort of 1:33.231s three tours from home.

The three-time MotoGP vice-champion says he found it “really strange” to be starting at the back of a premier class encounter on merit, though revealed he was “satisfied” with his race as he “felt a lot of good things with the bike”, Dovizioso keen to get stuck in to the Misano test taking place on Tuesday and Wednesday after the San Marino GP.

“It was a really strange race to start 24th; it’s crazy to think about and with Valentino (Rossi) close to me so it was strange to leave the grid like that,” explained Dovizioso.

“This is the MotoGP we are living now, but it was good because what we wanted was to push all the race and be consistent to learn.

“This is what we did because unfortunately we did the long lap and I lost the group, but after that everything was clear and I was able to play and understand a lot of things, which I’m very happy about.

“I also did my best lap two from the end and it wasn’t bad at that moment, so I’m pretty satisfied with what I felt in the last 15 laps because I felt a lot of good things from the bike but now we have to work with the team to try and analyse and understand why it did so we can put everything together.

“I need the possibility to be able to do that from the beginning, so I’m very happy to do the test on Tuesday and Wednesday so I hope the weather will be good.”