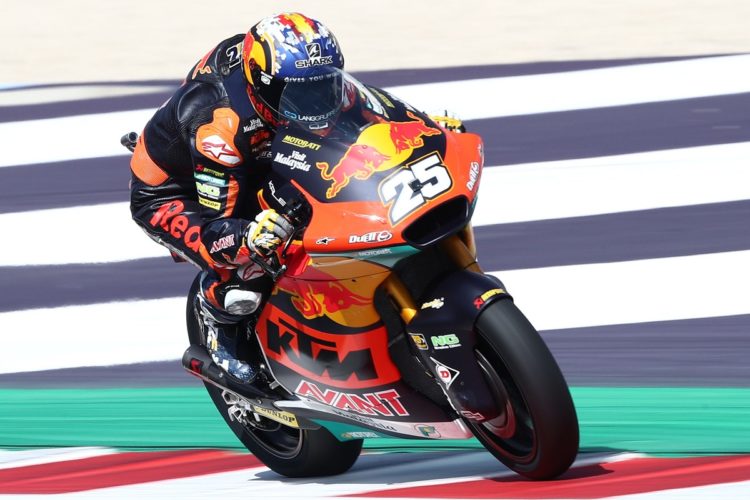 Fernandez got away well from pole to lead the field into Turn 1 initially, though Marc VDS rider Sam Lowes was keen to score his first win since Qatar at the start of the year as he dived through the still-injured Spaniard mid-way through the opening tour.

Having looked like the Brit could pull away from his pursuers in the opening laps Fernandez soon pegged his gap at just over half-a-second, though would lose out to Aspar’s Aron Canet as the sophomore racer set his sights on a first ever Moto2 victory.

Canet and Fernandez soon caught Lowes and began to heap pressure upon him, pressure which ultimately pushed him into a pair of errors at around a thirds-distance in which he ran wide and dropped to third.

Fernandez sat behind the Boscoscuro ace for the next half-a-dozen circulations as he calculated for a way past, a passage he eventually managed to find with a clean move at Turn 1 just past mid-distance.

Canet managed to remain within range of the Ajo racer across the rest of the race but never quite got close enough to retake the leadership, Fernandez starting to edge away over the final couple laps as Gardner began to push for the runners-up spot as he tried to preserve his series lead.

The Aussie grabbed the position from Canet on the penultimate tour with a bold move at Turn 2, the five-time intermediate class race winner even starting to put a bit of pressure on his rookie team-mate over the final lap.

He got close enough for a last-lap lunge at the mid-point of the tour, though a mistake through the fast Turn 11 right-hander only served to put him back under threat from Canet.

This allowed Fernandez to take the chequered flag 0.402s clear of Gardner to inch even closer in the title battle, with Canet bagging his fourth rostrum of the year only a further tenth back in third.

Lowes had to make do with another fourth place not far behind, while Marco Bezzecchi completed the top five for VR46.

Augusto Fernandez was sixth on the other Marc VDS machine ahead of Ai Ogura, the Honda Team Asia man getting the better of Xavi Vierge in the final couple tours secure the place.

Fabio Di Gianantonio had a quiet ride to ninth for Gresini, while Celestino Vietti once again staged a decent recovery to round out the top ten having started 17th.

Jake Dixon-who made his return to the Moto2 ranks for the first time since Austria after a pair of starts in the premier class with his Petronas SRT outfit-struggled to make progress from his 20th position starting spot due to a poor start, the ex-British Superbike pilot eventually taking 19th after charging back from the rear.

Gardner’s series lead stands at 34 with only four races still to run, with Bezzecchi now the only man still in mathematical title contention a distant 81 points adrift with only 100 left in play.