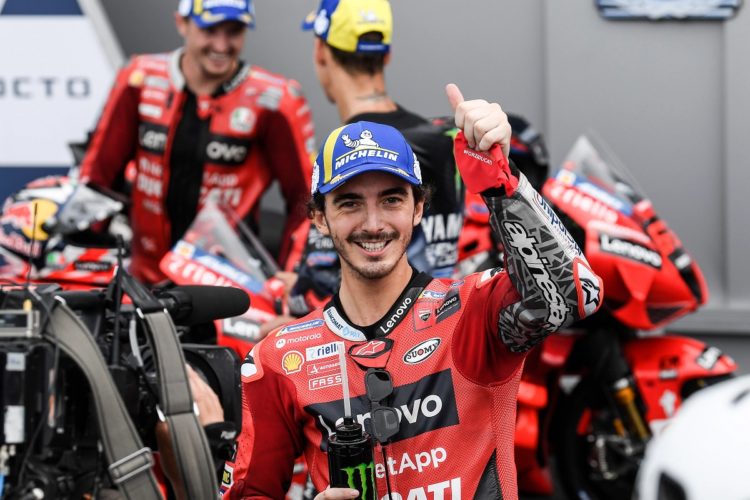 Francesco Bagnaia says he was “worried” as Fabio Quartararo closed in over the climactic laps of the San Marino Grand Prix, forcing him to give “maximum effort” to hang on.

The Ducati pilot managed to hold off the charging Quartararo to win the San Marino GP after running into tyre trouble in the latter stages of the contest, Bagnaia narrowing the series leaders points advantage to 48 with four races remaining after taking the chequered flag just 0.364s clear of the Yamaha man.

Bagnaia admitted that he was “worried” as Quartararo relentlessly ate away at the three second lead he had crafted, though says he knew it was “not easy to pass a Ducati at Misano” and thus gave it “maximum effort” to try and score his second premier class win in as many races.

“I knew it would be very important to start well and be pushing from the start because with the soft the initial grip was better,” explained Bagnaia post race.

“I also knew that Fabio (Quartararo) in the last part of the race with the medium would be faster so I tried to be fast and consistent from the start.

“Then I just tried to manage the tyres and in the last laps it was really difficult because Fabio was recovering four or five tenths a lap which was not easy, but I tried to do my best and my last sector three was my fastest of the race, so this was great.

“For sure I was worried (about Quartararo in closing laps) but I also know that passing a Ducati at Misano is not easy, I knew he was fast in sectors one and four but we were really good in sectors two and three so I just tried to not let him stay too close.

“Then on the last lap I put in maximum effort and I managed to get the win, to do this here is very special for me.”

The 2018 Moto2 world champion reckons his Misano success is “more special” than his first premier class win that he achieved at Aragon just a week ago, adding that his maiden win was crucial in giving him “a lot of motivation” to do the same at home in Italy.

“I did my best ever start because I went the moment the light was off which was incredible, it was incredible and when I passed the line the first time I looked for my pit board and it said plus one second, which was great,” continued Bagnaia.

“The win at Aragon gave me a lot of motivation to arrive here to prepare and win a race, this one was more special (than Aragon win) because it’s my home grand prix and on the slowing down lap I think I did my slowest ever just trying to stay hi to everyone.”