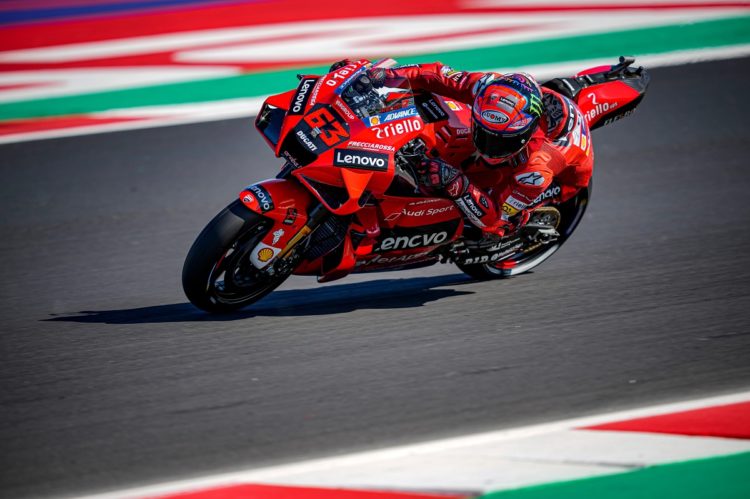 Bagnaia converted pole into the lead at Turn 1 as team-mate Jack Miller fended off Quartararo for second, the Italian immediately building a lead of over a second by the end of the opening tour.

The two leading Ducati’s started to stretch away as Quartararo was forced to defend from Jorge Martin’s Pramac-run Desmosedici, the Yamaha mans cause assisted as Martin crashed out at Turn 14 just a few laps in.

Quartararo though started to get into a dangerous rhythm as he slowly closed down Miller across the opening part of the race, the Frenchman beginning to threaten the Aussie approaching half race distance as his soft compound rear tyre began to suffer.

The series leader duly relieved Miller of second with 13 tours remaining, though by this point Bagnaia had managed to craft a near three-second lead.

The Aragon Grand Prix winner’s lead was reduced to under a second with only a few tours remaining as Quartararo started to get within slipstream range, Bagnaia storming across the line for the penultimate time with only a third-of-a-second separating him from the charging M1.

A slight misstep from Quartararo at Turn 6 though just allowed Bagnaia enough room not to have to defend, his Ducati’s superior power dragging him away down the back straight and thus ensuring his second career victory by just 0.364s.

Quartararo bagged more important points for his championship chase in second, while Enea Bastianini put in a stunning effort to score his maiden premier class rostrum result after passing the struggling Miller in the latter part of the race-the Avintia rider posting several fastest laps on his year-old Ducati.

Marc Marquez and Suzuki’s Joan Mir managed to get the better of the fading Miller on the final circulation to take fourth and fifth, the Ducati pilot having to make do with sixth.

This would ultimately become fifth though after Mir was docked a position for touching the green on the outer extremities of the track on the last lap, leaving Mir sixth.

The other factory Honda of Pol Espargaro ended up seventh ahead of Aprilia’s Aleix Espargaro, while Brad Binder fought back to take ninth from 17th on the grid ahead of LCR Honda’s Takaaki Nakagami who completed the top ten.

Michele Pirro performed well in his second wildcard appearance of the season to take 11th ahead of Johann Zarco, who failed to recover from a poor start after dropping all the way out of the top ten from fifth on the grid.

Maverick Vinales also suffered a bad start from tenth, though at least managed to ride back to 13th and thus score his first MotoGP points for Aprilia.

Valentino Rossi meanwhile managed to move forward to end up 17th for Petronas SRT just ahead of Franco Morbidelli, who struggled to make an impression in his first race in three months as well as his debut for the factory Yamaha outfit.

Andrea Dovizioso managed to finish his first race of the year as the final classified rider in 21st, while Alex Rins joined Martin and Iker Lecuona as the only race retirements after crashing out from fifth at Turn 1 with ten laps remaining.

Quartararo’s points advantage stands at 48 with four races to run, Bagnaia strengthening his grip on the runners-up spot while Mir slips to 66 adrift of the Yamaha man.