Petronas SRT morphs into RNF Racing for the 2022 MotoGP season 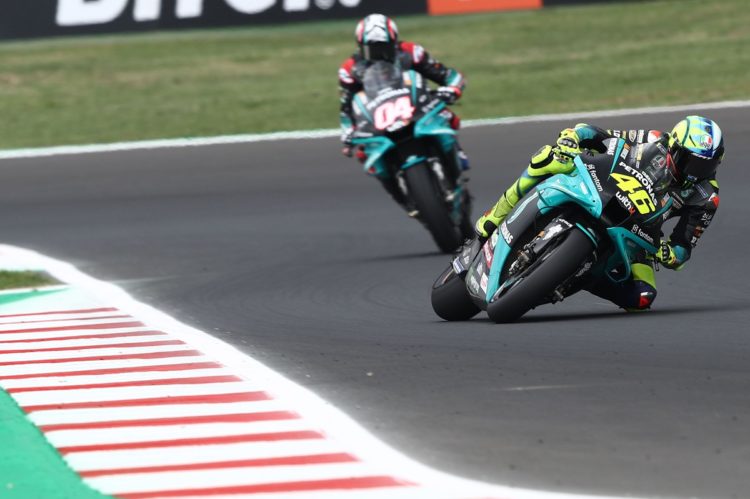 The Petronas SRT squad will be rebranded as RNF MotoGP Racing as part of its new ownership structure in 2022, with current team boss Razlan Razali continuing to lead the operation.

Announced on Friday evening at Misano, current Petronas SRT boss Razali-alongside Dorna Sports CEO Carmelo Ezpeleta-confirmed that the squad would continue on from 2022 under a new ownership structure following the exit of title sponsor Petronas at the end of the season, leading to the sale of the outfit by current owners Sepang International Circuit.

The new team has also signed a five-year deal to remain a part of MotoGP until at least the end of 2026 as an independent operation, securing its future in the medium term.

While the organisations Moto2 and Moto3 teams will be sold off-the latter squad having been announced on Friday to be taken over by ex-MotoGP rider Michael Laverty to act as a talent team for upcoming British riders-the management structure of the SRT outfit have completed a deal to take over the premier class operation for next year, as well as its supply of Yamaha M1 machines.

Andrea Dovizioso has already been confirmed as one of its riders next season on a full-factory M1, with SRT Moto3 competitor Darryn Binder set to jump into the premier class alongside the veteran Italian on a year-old Yamaha.

Razali says his new RNF Racing venture symbolises a “fresh and stronger MotoGP team” following months of uncertainty after the news of Petronas and Sepang Circuit ending their involvement in the setup, the Malaysian confident the team will be in an even stronger position in future campaigns with its new owners.

“It has been a whirlwind journey for us. In recent months, we have put all our efforts to reset, rebrand and relaunch as a fresh and stronger MotoGP team,” said Razali.

“I would like to thank Carmelo for his continued trust and confidence in me to begin this second chapter with a newly rebuilt team competing in MotoGP’s premier class for the next five years.

“For the season ahead, under the new entity of RNF MotoGP Racing, the rebranded team will continue our blueprint that have proven success before.

“Expectations will be high and we will push hard to meet these aspirations. Equipped with the experience we gained and having achieved multiple highlights in the past, we look forward to the 2022 season as an even stronger team entry.”

SRT has suffered a tough 2021 campaign so far off the back of a sublime 2020 season that saw the team score a total of six wins with Fabio Quartararo and Franco Morbidelli, the latter even going on to finish as runner-up in the riders standings, with the squad ending the year second in the teams championship behind only Suzuki.

It has seen a rather broken-up 2021 due to Morbidelli suffering a knee injury prior to the Dutch TT in June, the Italian now having left the team after securing a promotion to the factory Yamaha outfit for the rest of the year as soon as returning from injury this weekend at Misano due to Maverick Vinales’ sacking, leaving Valentino Rossi as its only full-time rider this year.

The seven-time premier class champion sits a lowly 21st in the standings having racked up just 28 points, Rossi having been joined by ex-Ducati pilot Dovizioso for the rest of the year after riding alongside several stand-in’s across the past few months.