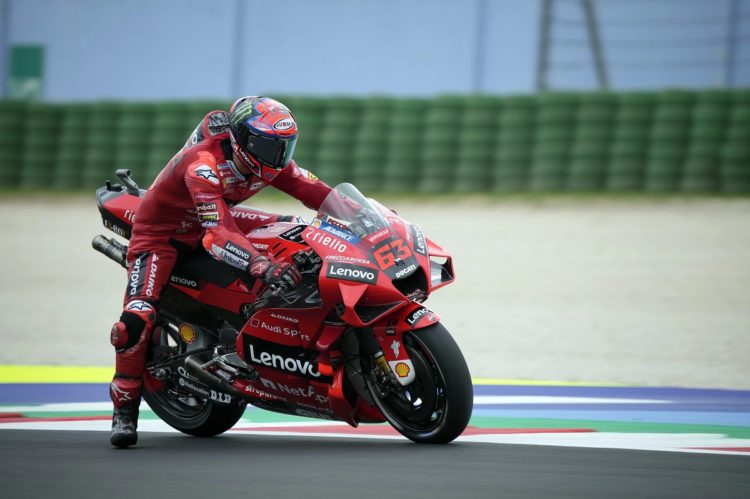 It was Quartararo who looked the man to beat in the early moments of the pole shootout, the field rushing out on track as soon as the green light was illuminated at the end of pit-lane due to the ever closing rain clouds that threatened the circuit.

The Yamaha racer was on scintillating form having led the preceding FP4 test as he smashed the fastest lap of the weekend on his opening gambit to post a 1:31.367s, with Bagnaia the man getting closest a distant 0.297s adrift of the Frenchman.

With the rain still just about holding off, the 12-man Q2 contingent all quickly bolted on fresh rubber to head straight out on track for the second and final runs, Bagnaia at the head of the queue right in front of Honda’s Marc Marquez.

The Aragon Grand Prix winner lowered his gap to the leader to just over a tenth-of-a-second on his opening lap before finding even more time on his closing effort, lapping the Misano venue in a stunning 1:31.065s to shatter the MotoGP lap record and well and truly throw the gauntlet down in the process.

Team-mate Jack Miller meanwhile also managed to find good improvement to slot into second ahead of Quartararo, though the series leader was winding himself up to complete his own final two-lap dash just seconds behind.

He would ultimately never get the chance to improve though as he pushed his M1 a little too far as he began his final flyer, Quartararo losing the front and sliding out of contention for a sixth pole of 2021.

This left Bagnaia to celebrate a second pole in a row, while Miller hung on to complete the second Ducati 1-2 in as many races ahead of Quartararo, whose earlier benchmark was enough to keep him on the front row.

Jorge Martin ended up fourth on his Pramac Ducati directly in front of team-mate Johann Zarco, who ensured that all four of Ducati’s GP21 machines would feature in the top five at the start of the San Marino GP.

Pol Espargaro managed to bag sixth on the grid and fastest Honda just ahead of team-mate Marquez, the six-time premier class champion having crashed out at Turn 9 while trying to follow Bagnaia on what would ultimately become his pole lap.

Aleix Espargaro was another to suffer a crash on his final run as he was shuffled to eighth in the end ahead of fastest Suzuki runner Alex Rins, with the other Aprilia of Maverick Vinales completing the top ten.

Takaaki Nakagami narrowly missed out on Q2 once again after crashing on his final effort while looking good to usurp Bastinaini at the head of the times, the LCR man therefore starting 13th ahead of Ducati tester and wild-card Michele Pirro.

The returning Franco Morbidelli had to settle for 16th on his factory Yamaha debut just clear of fastest KTM rider Brad Binder in 17th.

Petronas SRT meanwhile suffered another poor qualifying result as the locked out the final two spots on the grid, Valentino Rossi only just holding off new team-mate Andrea Dovizioso for 23rd, despite suffering his third crash of the event, to the tune of 0.131s as the latter continues to learn his new machine.