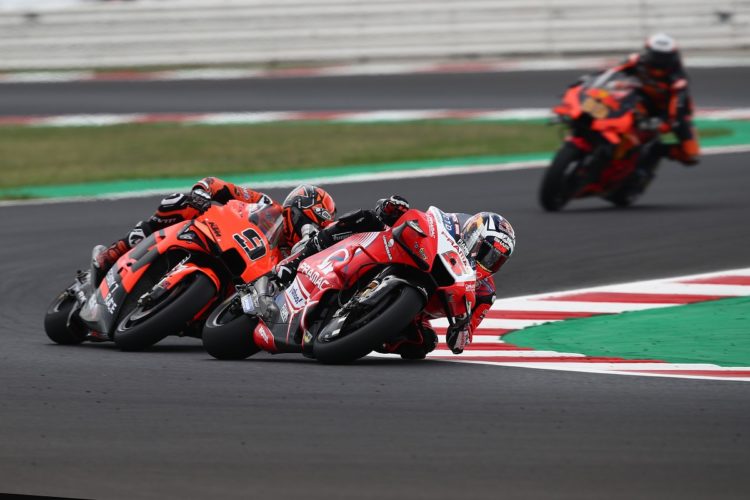 Johann Zarco led the way in a wet second practice for the San Marino Grand Prix at Misano as Ducati proved its wet-weather prowess with a top three lockout.

Following on from the heavy rain shower that soaked the venue in the latter stages of FP1 on Friday morning, the second test began with the track already wet-thus forcing the 24 MotoGP riders to tackle the Misano circuit on wet-weather rubber.

A vast selection of the competitors took turns at leading the times at some point as track conditions continued to improve, with Desmosedici riders most commonly seen towards the peak of the timing pylon.

Factory Ducati men Francesco Bagnaia and Jack Miller asserted their presence towards the top as the session entered its closing moments, the former heading his team-mate by a matter of hundredths.

It would ultimately be Zarco though that topped the final session of the opening day of the San Marino GP, the Pramac pilot banging in a pair of rapid efforts as the track began to slowly dry at the end-a 1:42.097s tour leaving him a commanding 0.553s clear of Bagnaia.

The Aragon GP winner headed Miller by a further tenth-of-a-second to complete an all-Ducati top three at the top of the timesheets, with Joan Mir the best of the rest on his Suzuki in fourth.

Marc Marquez rounded out the top five for Honda as the last man within a second of Zarco’s leading benchmark, KTM’s Miguel Oliveira managing the sixth best time.

Danilo Petrucci once again came alive in the slippy conditions to end up seventh for Tech 3 ahead of Aprilia’s Aleix Espargaro, while the other Tech 3 RC16 of Iker Lecuona was ninth despite a nasty crash towards the end of the test.

The Andorran lost the rear of his KTM off-throttle while manoeuvring through Turn 1, Lecuona being flung from his machine and heavily onto his back on corner exit.

He managed to hobble clear of the crash site, but elected to not head back out afterwards.

Alex Marquez closed out the top ten runners on his LCR Honda, while the fastest Yamaha runner was the returning Franco Morbidelli down in 13th-series leader Fabio Quartararo a lowly 18th just behind FP1 leader Maverick Vinales as the M1’s wet struggles look to be continuing.

Enea Bastianini meanwhile again ended up as the fastest rookie despite an early crash at Turn 1, the reigning Moto2 world champion losing the front of his Avintia-prepared Ducati while braking over the bumps on entry to the bend.

Andrea Dovizioso continued to gather experience with his new Yamaha steed across all conditions, the ex-Ducati racer ending the day 21st 2.4 seconds adrift of Zarco in his first meaningful wet running in a year.