Vinales leads San Marino FP1 for Aprilia ahead of Mir 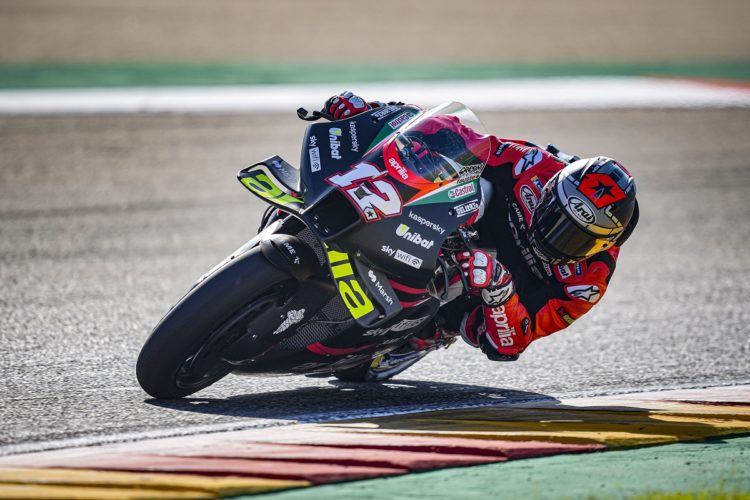 Maverick Vinales rose to the head of the timesheets as his Aprilia MotoGP apprenticeship continues in opening practice for the San Marino Grand Prix at Misano.

The Spaniard-who struggled on his Aprilia debut at Aragon last weekend en-route to a 19th place finish-was straight on the pace as the soon as the lights went out for FP1 at Misano alongside team-mate Aleix Espargaro, Vinales ending the first runs on top with a 1:32.966s.

He had posted several laps good enough to leave him well within the top five, though Ducati duo Francesco Bagnaia and Jack Miller took their turns at the top-the Aragon GP victor taking over from Vinales with a 1:32.801s with Miller slotting in just behind.

Joan Mir soon took the top spot on his Suzuki before Vinales once again headed out for a short time attack, the nine-time premier class race winner firing in a 1:32.666s just moments before a heavy rain shower soaked the circuit with just over ten minutes remaining.

This meant Vinales was left to top his first official MotoGP race weekend session with Aprilia in only his second event on the RS-GP just 0.080s clear of reigning series champion Mir, with Bagnaia third.

Points leader Fabio Quartararo was seventh after struggling with chatter over the bumps throughout the test, the Frenchman just shading Honda wild-card racer Stefan Bradl and Marc.

Aleix closed out a top ten covered by just 0.436s, the British GP rostrum man gatekeeping a spot within the ten by just 0.040s over Pramac’s Johann Zarco.

Enea Bastinaini was the best rookie in 12th off the back of his best MotoGP result at Aragon last time out, while the returning Franco Morbidelli ended FP1 0.904s adrift of Vinales in 16th on his debut for the factory Yamaha operation.

Andrea Dovizioso meanwhile completed the 24-strong field on the timesheets as he endeavoured to get aquatinted with his new Yamaha, the Italian lapping 2.5 seconds away from the leading benchmark as he manoeuvred an M1 machine for the first time in nearly a decade, his Friday at running at Misano his first race weekend action since the 2020 season finale ten months ago.