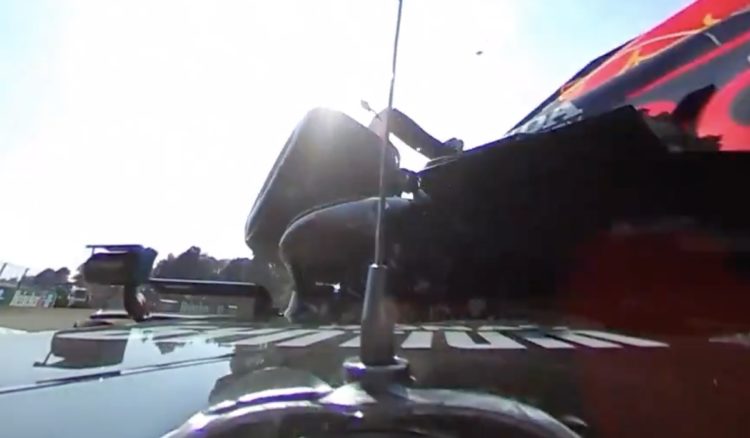 The dramatic footage, captured by a 360º camera on Hamilton’s Mercedes W12, shows how Verstappen’s Red Bull is launched into the air before landing on top of his rival. The right-rear wheel of Verstappen’s car impacts the halo device before rolling over Hamilton’s head.

Hamilton can then be seen checking his helmet with both hands, as the two cars land in the gravel trap at Turn 2 of the Monza circuit.

Hamilton credited the halo with saving his life, as without it his head and neck would have been supporting a large portion of the weight of Verstappen’s car.

“I feel very fortunate today,” said Hamilton. “Thank God for the halo which saved me, and saved my neck.”

“I am so grateful I am still here. I feel incredibly blessed that someone was watching over me today.

“I don’t think I’ve ever been hit on the head by a car before – and it is quite a big shock for me.

“We are taking risks and it’s only when you experience something like that that you get the real shock of how you look at life and how fragile we all are.

“If you look at the images of the crash, my head is really quite far forward in the cockpit.”

Hamilton escaped with just a sore neck and damage to his crash helmet and was able to attend the Met Gala on the Monday after the race.