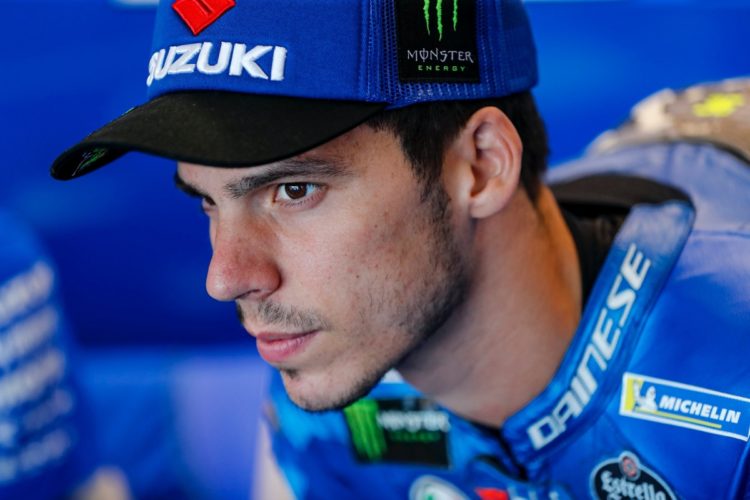 Joan Mir reckons it is imperative his Suzuki team can properly introduce its hole-shot device for the GSX-RR as soon as possible after lacking the speed for challenge for victory.

Mir managed to move up from seventh on the grid to complete the rostrum in the Aragon Grand Prix, the reigning series champion taking the chequered flag 3.9 seconds adrift of race winner Francesco Bagnaia.

Suzuki enjoyed a very competitive outing at the Spanish outing last season, team-mate Alex Rins scoring a victory and a runners-up result while Mir bagged a pair of third places across the two races contested.

Mir says that while he was able to lap around the same as the front-runners once finally getting free of Jack Miller and Aprilia’s Aleix Espargaro, the lack of acceleration afforded to him by his machine not only is costing Suzuki overall lap-time to its rivals but making it all the more difficult to make overtakes stick.

“It was difficult, I tried to give my best but it was not enough to get the victory today,” said Mir.

“The main problem was at the start of the race behind Aleix (Espargaro) and Jack (Miller) where I was stuck and lost a lot of time.

“I was probably doing the same pace as the guys in front (after moving into third) but it was not enough to catch, but I am happy even though we are just lacking a little bit to fight for victories, overall the podium is nice.

“We are losing acceleration compared to them (leaders), we are losing a lot on the straights because of that, we also need to improve our braking hopefully for Italy.”

The Spaniard was once again left to rue Suzuki’s relative lack of pace over a single lap, an issue that not only denied him the opportunity to fight for his second career success but also meant the other GSX-RR of Rins could only finish 12th after starting a lowly 20th.

Mir added that he reckoned Suzuki should work harder on finally introducing its hole-shot device full-time, the Japanese factory having brought the device for the Austrian GP before removing it as it looked to complete further development-neither rider having used it across the last two events at Silverstone and Aragon respectively.

“He (Aleix) was not stronger, he was just in front but he had really good acceleration and was able to stop the bike well and have a good (corner) entry, not so good in the middle (of the corner) but was good on the exit so it is always difficult to overtake that bike,” continued Mir.

“I think if I could have started in the first or second row and be closer to the first guys at the start then maybe at the end we could have had an option, but where we started no (we couldn’t challenge.)

“I hope to get some new items on the bike (at Misano) to be more competitive and have a better last part of the season, I really like Misano and last year I was able to be fast and consistent.

“We are still working on the (holeshot) device, we haven’t used it the last two races so we need to try and make it work.”