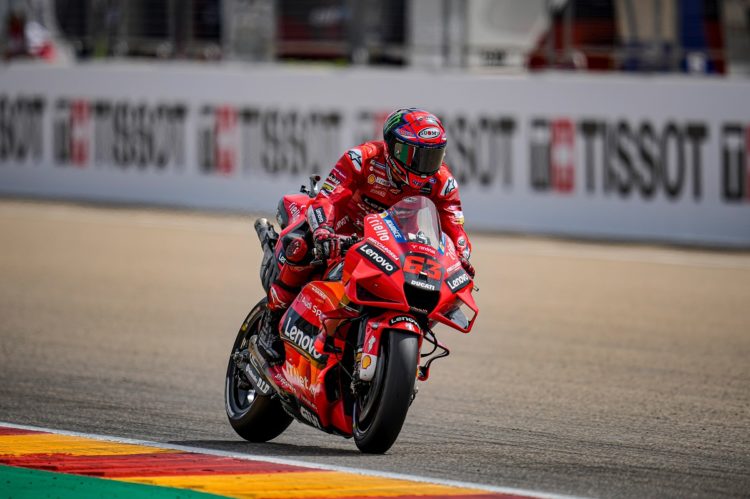 Francesco Bagnaia held off Marc Marquez in the closing stages of the Aragon Grand Prix to secure his first MotoGP victory as points leader Fabio Quartararo struggled to eighth.

Bagnaia launched well from pole position to hold the lead into the opening bend, while Marquez jumped ahead of front row men Quartararo and Jack Miller to slot into second behind the Ducati pilot.

The leading duo started to escape from third-placed Miller around a third of the way through the encounter as the Aussie started to come under pressure from Aleix Espargaro and Suzuki’s Joan Mir behind.

Bagnaia and Marquez pulled away from the rest at around three to four tenths of a second every lap, the Honda rider stalking the Italian every inch of the way as he looked to secure a second success of the year.

Marquez continued to bide his time until he began to turn up the heat with just half-a-dozen tours remaining, the Spaniard starting to look for a way past the Desmosedici.

He initiated his first move at Turn 5 with just a few circulations left, though he ran wide and let Bagnaia back into the lead again.

Another move would follow at the chicane before Bagnaia once again cut back ahead, Marquez now really going for it as he tried once again dived through at Turn 5 five the following lap before running wide once again.

With just one tour remaining Marquez knew he had to get through to defend from the Ducati’s power advantage on the one kilometre back straight, with moves at both Turns 1 and 5 once again failing to pay divedends as he couldn’t pull his RC213-V up sufficiently.

One final attack at Turn 12 ultimately spelled the end of his victory chances as he ran clean off the track, allowing Bagnaia off the hook across the final few bends to take the chequered flag for his first ever victory just 0.673s clear of Marquez.

Mir completed the rostrum after getting the better of Espargaro and a fading Miller towards the end, the latter duo completing the top five in the end.

Enea Bastianini rounded off a brilliant charge in the closing laps to secure his best ever MotoGP result of sixth as the reigning Moto2 world champion passed KTM’s Brad Binder for the position on the final lap.

Quartararo lacked speed throughout the encounter, the series leader consistently losing time through the final turn, though he at least managed to get the better of Jorge Martin on the last lap, while LCR Honda’s Takaaki Nakagami finished off the top ten.

Iker Lecuona ran as high as seventh at one point in the race before a mistake dropped him back to his eventual finishing point of 11th, while 2020 Aragon winner Alex Rins’ tough weekend failed to improve much as he took 12th from 20th on the grid.

Jake Dixon unfortunately saw his second-and so far last-MotoGP event end on the second lap after crashing out while battling with team-mate Rossi, while Alex Marquez crashed at Turn 5 on the opening lap.

Bagnaia’s success sees him to close to 53 points adrift of Quartararo with five rounds remaining in the runners-up spot, with Mir falling to third overall a further four points back.