Espargaro: ’Seeing Fausto so happy on podium would have been a dream’ 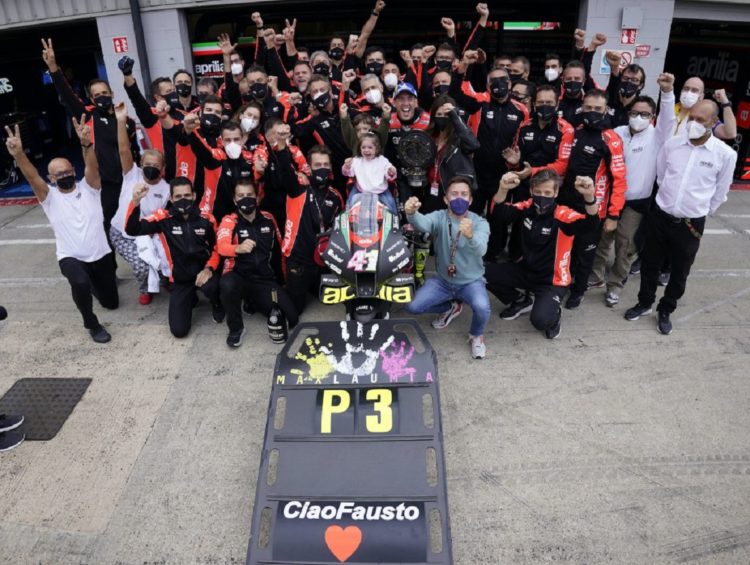 Aleix Espargaro says seeing Gresini team founder Fausto on the podium after his Silverstone success-the teams first since 2014- “would have been a dream.”

Gresini passed away after a battle with Covid-19 back in February, leaving his squad in the hands of wife Nadia and his children as they chased its first podium since taking on the Aprilia factory contract at the start of 2015.

The organisation impressed with the newly updated RS-GP that debuted for the 2020 campaign, with a comprehensive upgrade package for this season allowing Espargaro in particular to challenge for a top three position at several points during the year.

The Spaniard finally managed to capture a rostrum with a strong ride to third in the British Grand Prix after holding off a charging Jack Miller’s Ducati on the final tour, marking not only his and the Gresini’s first podium since 2014 but Aprilia’s first premier class appearance on the box since 2000.

Espargaro said post-race that seeing how happy Gresini would have been to see his team returning to the podium “would have been a dream”, adding that he himself was glad to have continued with the programme after thinking about “ending my career a couple times” while suffering with the old RS-GP a couple seasons ago.

“This is like a dream, I think I’m still dreaming,” enthused Espargaro following his ride to third in the British GP.

“He really suffered in the most difficult stages of the Aprilia programme, but he showed us the right way forward and now we are fighting with the top brands in the world and he also started this project so this programme is for him and his family.

“It’s been a long five years to arrive at this point, especially considering two years ago because I had many crashes and the bike was not competitive and I really suffered a lot, I thought about ending my career a couple of times and trying something else.

“However I never gave up and now to get here is fantastic, and it’s even better to achieve this not because of the weather or due to crashes but because we have been very competitive all season so achieving this podium is great for everyone at Aprilia and myself, we just need to keep working hard and keep our momentum going.”

Espargaro explained that being able to hold off Miller on the last lap-the Aussie diving through at Village before he countered to retake the place at Aintree moments later-“makes me even more proud”, the Spaniard not ruling out another rostrum attack at the next round at Aragon due to not “having pressure to get my first podium.”

“It was unbelievable (to battle brother Pol) and I made a strong start, Pol was ahead with a good gap and I caught him but I paused for a second and looked at the big screen and we had a gap over the rest so I was like ‘this can’t be real’,” continued Espargaro.

“There isn’t much between all the top riders in MotoGP, we are quite equal except Fabio who is a step faster because he’s always fighting for the victory, I will try to be strong again in Aragon and now I will not have the pressure to get my first podium so I’ll be more relaxed and hopefully fight for the win.”