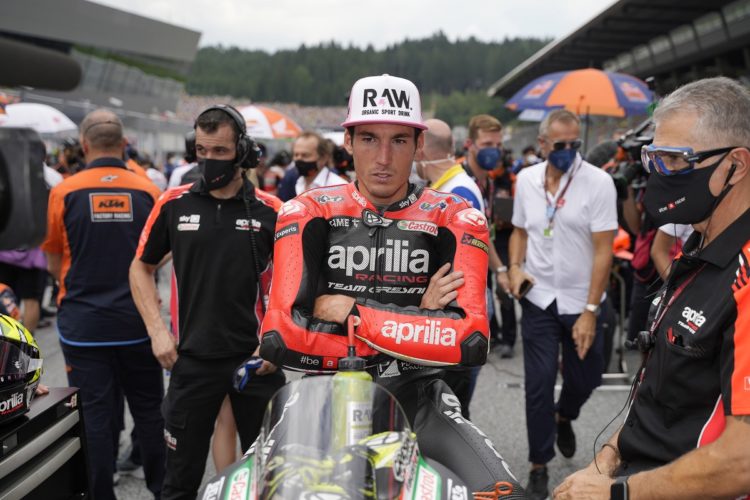 Aleix Espargaro reckons he could have saved a rostrum in the Austrian Grand Prix if not for a mistake on the final tour that cost him “six or seven seconds.”

The Aprilia rider elected to stay out when rain intensified in the final half-dozen tours of the Austrian GP, leaving him second behind Brad Binder as the bulk of the leaders decided to head into the pits to switch to their wet-prepared machines just four laps from home.

This put the Spaniard in with a shot of scoring Aprilia’s first MotoGP rostrum since its 2015 return to the series and over two decades since Jeremy McWilliams scored its last at Donington Park in 2000, though a slow final circulation saw him ultimately slip to tenth while Binder held on to win.

Espargaro says an error at Turn 1 at the start of the final lap put an end to his hopes of ending the Italian marque’s rostrum drought, leaving him “frustrated” with the outcome.

“Obviously I’m very frustrated but this is the magic of the sport, things can change so quickly and this is what we love about it,” explained Espargaro.

“I tried my best and I was very competitive in the dry, then when I saw rain drops I said ‘you need to go for it’, I saw (Brad) Binder staying out and I knew I had to do the same.

“The last lap was really difficult to deal with, it was really tricky to control the bike and I made a big mistake at Turn 1 where I ran wide so I lost six or seven seconds which was enough to lose the podium chance.

“When you race here you can have a potentially great result or a bad day and unfortunately it wasn’t meant to be today, so I will try again at Silverstone.”

Espargaro admitted that he wasn’t able to match the speed of KTM’s Binder ahead across the closing stages, labelling the now two-time premier class victor as “unbelievable” and one of the “most talented” riders currently competing in MotoGP.

The one-time premier class rostrum finisher-his sole podium appearance coming on an Open-spec Forward Racing Yamaha at Aragon back in ’14-added that he believes the next round of the series at Silverstone is a “very good opportunity” to “fight for the podium” with the RS-GP.

“He’s (Binder) unbelievable, he’s one of the riders with the most talent on the grid and the way he can play with his bike and the lean angles he can use in the dry allows him to have great control of the bike in tricky conditions like today, so I’m very happy for him,” continued Espargaro.

“He was very brave, believe me the last lap was a nightmare and incredibly tough to control the bike, so chapeau to him.

“I can’t wait for Silverstone because it’s a great track, you can really enjoy the power of the bike and with the long corners so we missed it for the last couple years.

“I was very competitive in the race last time, I think it’s a very good opportunity for Aprilia so hopefully we can come back stronger and fight for the podium again there.”

Espargaro’s run to tenth at least ensured that he has now scored the highest amount of riders championship points of his Aprilia tenure so far, with his current 67 already eclipsing his record of 63 with the manufacturer back in ’19, and still with seven rounds left to run this season. 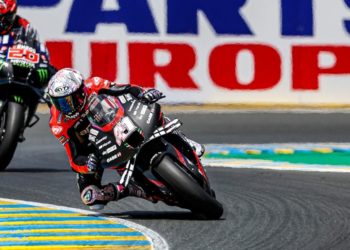