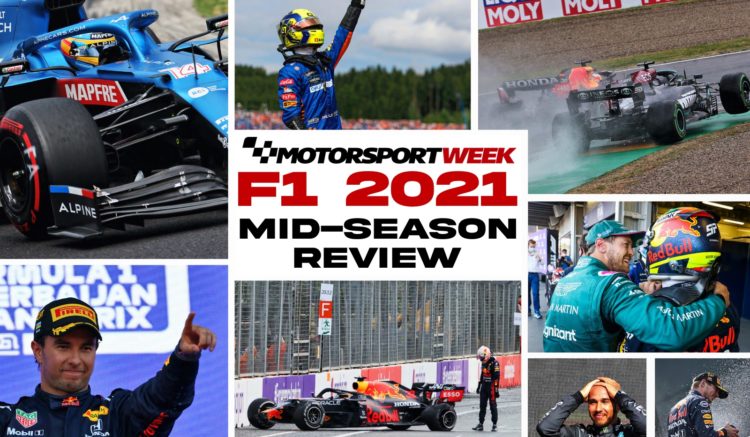 It’s the summer break and for Formula 1 drivers that means jetting off on holiday (everyone is in the Med somewhere), bragging about it on Instagram, then adding a motivational slogan about being #BackAtIt at the gym. But how has everyone fared so far in F1 2021: Lewis vs Max plus the other 18 guys? Motorsport Week reflects on the first half of the season.

The title fight, for the first time in quite a while, has been properly tasty. It’s six wins plays four, in Max Verstappen’s favour, but Lewis Hamilton leads the points. Both have had exceptional peaks, and their wheel-to-wheel battles have been superb, the toxicity of Silverstone aside.

Verstappen has been luckless thrice: Baku, when the tyre failure sent him towards the Caspian; Silverstone, when contact with Hamilton pitched him towards Towcester, and finally Budapest, when Bottas bowled him into the summer break early. That’s 60-ish points down the gutter.

Hamilton spent a minute in an Imola wall, but still wound up second, had a ropey Monaco, then a less-than-magic button balls-up in Baku. But he’s on the brink of win 100, which is quite extraordinary, and usually hits another gear after summer. Either, at this stage, would be a deserving World Champion. This is a battle we have anticipated for years and it has lived up to expectations.

Their teams, too, have traded blows. There was low rake vs high rake, bendy wings, pit stop directives and then the unedifying Silverstone episode. Red Bull had the high ground but swiftly buried themselves six feet under before Angry Spice eventually let it go once CSI: Alex Albon was deemed irrelevant. The destination of both trophies could yet be determined by the respective team-mates.

Valtteri Bottas has endured a difficult time. When it has been bad, it has been very bad. And even when it has gone well it has usually gone wrong – he got the car working in Monaco, when Hamilton did not, and then had a 43-hour pit stop. Even Haas had finished by then. Bottas’ win drought is perilously close to a whole year – though at least that means it is almost Sochi time again. By then, his future should be sorted and perhaps, when there’s nothing to play for, he’ll go all Arsenal and perform well.

Sergio Perez has been an upgrade on 2019-spec Pierre Gasly and Alex Albon, though has yet to tame the beast that is Verstappen. One-lap pace remains a weakness, as it has since 2011, but in race trim he has been better than his predecessors (mostly). Victory in Baku was fortunate, but he was there to profit when others weren’t. The cauldron of Mexico’s Foro Sol stadium will be sensational – assuming the event happens. If he wins, well, the roof that isn’t there anyway will surely come off.

Following an arduous campaign in 2020, Ferrari injected some performance to restore respectability. The SF21 is not Maranello’s finest but it is leaps above the bin fire that was the SF1000. Charles Leclerc still sometimes overdrives but has usually been superb, especially in Monaco, taking pole, which was squandered six corners into Sunday.

The number 1 grid spot a stone’s throw from his flat subsequently had a Leclerc-filled hole – but to his credit he hung around, congratulating Carlos Sainz on his first Ferrari podium. Sainz has slotted into Ferrari like a glove. The erudite Spaniard has shown why Ferrari was so swift to secure his services – it is a move that has benefited both parties. He is now onto four career podiums, yet has only stood on it twice.

McLaren returned to Mercedes power and hired Daniel Ricciardo. One of those things has worked out better so far. Former Twitch streamer Lando Norris has been the season’s standout driver, nearly taking a pole position, and indeed taking three podiums. And doing so while being fairly nonchalant about the whole thing. Ricciardo, meanwhile, has had a challenging time, the grim reality being that he has yet to adapt to the MCL35M. Being lapped at the venue where he dominated three years prior was brutal. That day there was a gulf in class and a Gulf on the livery – a throwback scheme that prompted talk of throwback weekends and one-off colour schemes. Ricciardo is still smiling, and persevering, and that deserves credit.

Renault became Alpine and brought back Alonso. It painted its car a gorgeous metallic blue but then named it after a road near Stoke-On-Trent. Alpine had a *nonchalant Gallic shrug* season up until Silverstone, when Fernando Alonso suddenly remembered he was Fernando Alonso and then somehow Esteban Ocon won in Hungary. Ocon’s triumph, aided by most of the front-runners being cannoned by Bottas, and the work of Spanish Defence Minister Alonso, was a reminder that good guys do win.

AlphaTauri boss Franz Tost again targeted fifth and again AlphaTauri is… not fifth. But it is sixth, and stands a shot at achieving that perennial goal. They are, it must be noted, the only team to score points each Sunday – and that’s not to be sniffed at. Pierre Gasly has maintained his 2020 brilliance and this time even Red Bull has grudgingly acknowledged that speed.

Gasly has taken on the older brother role to Yuki Tsunoda, who has spent portions of 2021 with a ‘But Mom I Don’t Wanna’ vibe. Rough Diamond Tsunoda has had too many shunts but has shown signs of improvement after realising aspects such as diet, training and team work are actually quite important. Moving from Milton Keynes to Italy, and following the University of Tost, undoubtedly helped.

Aston Martin spray-painted its pink panthers into green machines and realised it had been shaken and stirred by the floor regulations. Eco warrior, Pride promoter and protector of the bees Sebastian Vettel has reinforced his reputation as a Great Human Being and has been sporadically decent, and unlucky, while still displaying his penchant for an occasional pirouette. Lance Stroll is also there. Seventh, once its domain as an underdog, is now underwhelming, but Lawrence Stroll’s vision remains long-term, and judgment will only come then.

Williams, for the first time in years, is not last. Even before its Budapest bonanza of 10 points, it was on the fringes, underlining the gains, aided by the new owners’ cash injection. George Russell made Q2 his haven, and even had the temerity to drag the car into Q3. His Imola shunt was unwise, and his reaction unbecoming, but elsewhere he has been pretty stellar.

Points, finally, came, even if in tune with his F1 career his team-mate scored more. Still, he is clearly ready to fight at the front, and is in line to get that shot in 2022. Nutella ambassador and all-round stereotypical Canadian Nicholas Latifi has made one-lap gains, though continues to trail Russell, but has been closer in race trim. All his Thanksgivings came at once in Hungary, vaulting up to third from 18th in one swoop, and he looked consummately professional once there. Seventh, and a hatful of points, was his reward for hard work and determination.

Alfa Romeo was eighth in 2018, eighth in 2019 and eighth in 2020, so it was determined to avoid eighth once more. And it has done so! It is now ninth, with a car that is not terrible, but is not overly rapid. Kimi Räikkönen and the 21st century’s reincarnation of Jesus Antonio Giovinazzi continue to form a relatively anonymous line-up that could be entirely refreshed for 2022. The slightly peculiar Alfa Romeo-Sauber branding exercise will be retained, in some positive news for a team that has had little to shout about.

Meanwhile, at the back, the Star-Spangled Sputniks have taken a fair old battering and been the recipients of a fair few blue flags. Haas’ 2021 season is all about still being here, having been at risk of not being here in 2020, and next year it hopes here is much higher up. Mick Schumacher’s partnership with engineer Gary Gannon has been one of 2021’s highlights, and his learning year has indeed been uphill. Nikita Mazepin’s debut lasted two corners, producing ideal content for the internet, but since then he has been merely slow.

What next? Well, there should still be 12 races, with F1 determined to reach the magic 23, having decided to lump over half the season in the final four autumnal months of the year. Doubts remain over certain events, though a return to European heartlands is unlikely, with F1 out to rinse the cash-filled Middle Eastern nations. A Lewis vs Max epic beneath the lights in Abu Dhabi to decide the title? Fingers crossed. And fingers crossed for a return to normality in 2022, a return to the places we’ve missed since 2019, when Formula 1 welcomes a new era.

This mid-season review originally appeared in issue 430 of our weekly digital motorsport magazine, Motorsport Monday. Completely free to read with no sign-up necessary, Motorsport Monday is published every Monday morning and is packed full of motorsport content. Check out the latest issue here.