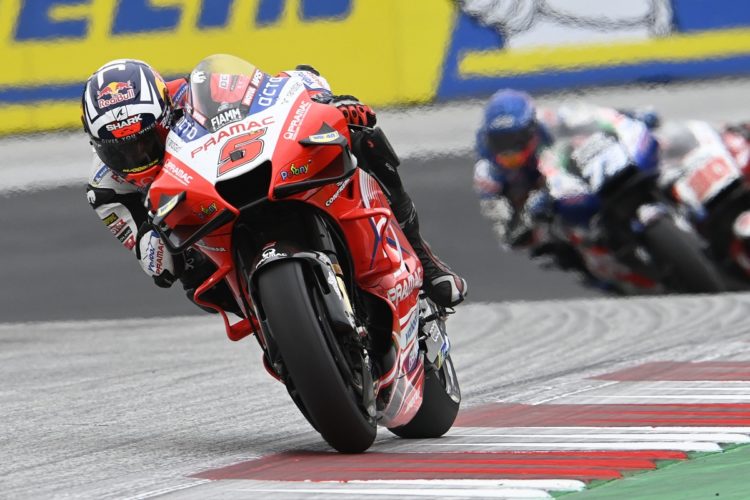 Johann Zarco shattered the all-time Red Bull Ring MotoGP lap record to lead FP1 for the Austrian Grand Prix by a monster eight-tenths of a second over Suzuki’s Joan Mir.

The Pramac Ducati rider elected to head out in the closing stages of the session with a brand new soft rear bolted to his Desmosedici as he endeavoured to try and secure himself a direct-to-Q2 passage at the earliest possible opportunity.

He relegated then-leader Joan Mir from the head of the times with a strong 1:23.408s-over two-tenths quicker than the reigning MotoGP world champion-before winding himself up on the following tour to set a lap another six-tenths faster-a 1:22.827s.

This meant the Frenchman smashed the all-time lap record for the Red Bull Ring-posted by team-mate Jorge Martin on his way to pole in last weekend’s Styrian GP-by 0.167s, heading second-placed Mir by 0.798s.

Alex Rins joined his Suzuki team-mate in the top three with his own late flyer, while early session leader Takaaki Nakagami ended up fourth overall as the only other rider to lap within a second of Zarco’s crushing time.

Aleix Espargaro utilised a handy tow from Ducati’s Francesco Bagnaia to slipstream his way to fifth despite only running a medium rear tyre, with Fabio Quartararo ending up sixth despite breaking down right as the session came to a close.

The series leader threw up his hand and coasted off the circuit on approach to the penultimate corner, though ultimately found himself able to re-join the track shortly after likely re-cycling his Yamaha and slowly head back to the pits.

Alex Marquez was seventh on the second LCR Honda ahead of Bagnaia, while the top ten was completed by Honda’s Marc Marquez and Styrian GP victor Martin.

KTM started out Friday quietly with Miguel Oliveira its top representative down in 15th just ahead of team-mate Brad Binder, with Jack Miller’s Ducati slotting in just behind in 17th.

Valentino Rossi ended FP1 in 14th, while part-time team-mate Cal Crutchlow continued to work on getting back up to speed as the injured Franco Morbidelli’s replacement in the Malaysian outfit in 20th.