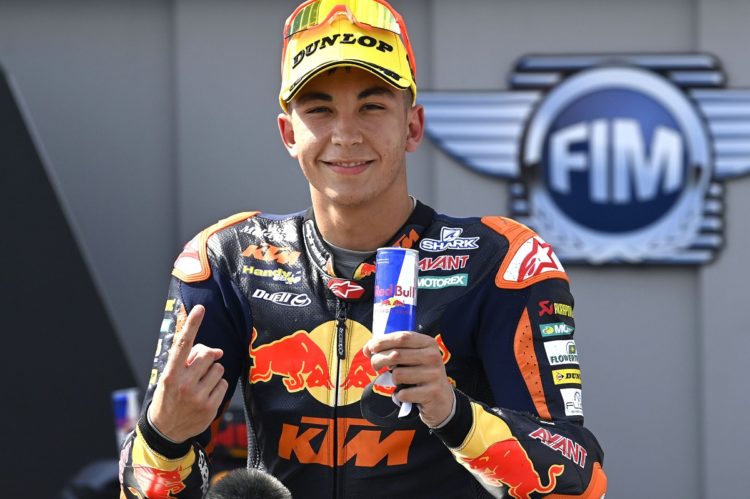 Raul Fernandez will ride for the Tech 3 KTM MotoGP squad next year, it was announced in Austria this afternoon.

The news confirms that both incumbent Tech 3 pilots Iker Lecuona and Danilo Petrucci will leave the outfit at the end of the season, and likely the premier class as a whole with only the single berths at Aprilia and Valentino Rossi’s VR46 Ducati operation still available.

Fernandez says he is looking to “enjoy himself” during his MotoGP bow next term, though affirmed that his full focus will remain on securing the Moto2 title ahead of Gardner prior to his graduation.

“Honestly, I’m really pleased with this opportunity from KTM, as much for this year as for the next,” said Fernandez.

“I’ve been learning a lot and enjoying Moto2 and was able to get into a position where I have this chance to enter MotoGP and for which I’m very grateful: it’s the dream of any rider to arrive to this class.

“Right now, the most important thing is to keep focusing on this season and giving all I have up until the last race to try and fight for the championship. If it doesn’t work out then fine, everything happens for a reason, and you have to look towards the positives.

“I’ve been a rookie this year and I want to close the chapter and then start again for 2022 where I’ll be looking to find a good feeling on the bike and, above all, aiming to enjoy myself.”

Rumours linked Yamaha to making a play for the Spaniard following the expected retirement of Valentino Rossi-which was confirmed in Austria on Thursday-as well as after Maverick Vinales announced he would quit the factory Yamaha squad at the end of the year, likely leaving two berths at the Petronas SRT team with Franco Morbidelli likely to replace Vinales.

Fernandez though elected to remain within the successful KTM fold, a programme that has seen both Brad Binder and Miguel Oliviera graduate to the premier class and go on to become race winners, the duo currently the line-up for the Austrian marque’s factory operation.