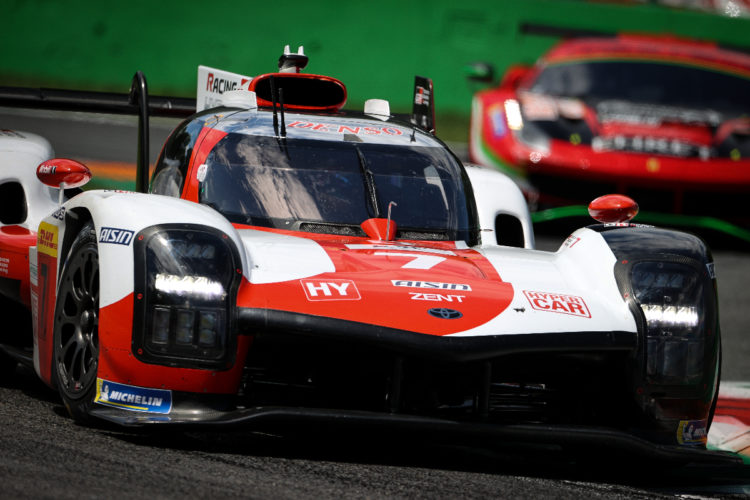 Kamui Kobayashi said that his Toyota GR010 Hybrid suddenly shut down while he was leading the Six Hours of Monza, but was able to recover after a full reboot on track.

The Japanese driver was comfortably leading the race aboard the #7 Toyota when he ground to a halt on approach to the Ascari chicane in the fifth hour of the race.

He was eventually able to get it going again after completing a power cycle, but lost about a minute to Alpine and Glickenhaus. The #7 crew was saved somewhat by Romain Dumas have to undergo a brake change while leading not much later.

Kobayashi, Mike Conway and Jose Maria Lopez eventually went on to win the race, but he later explained that the failure came out of nowhere.

“We maintained the gap properly and we were quite confident,” Kobayashi said about the team’s race before the failure. “During my lap, obviously the car just shut down somehow and we didn’t know what was going on. But obviously, we lost all the power train.

“There was an error message on my display, and obviously I had no power at all. I just communicated to my engineer and the call was that we needed to reboot the car completely, which means we need to stop the car.”

Kobayashi’s next course of action was to try and find a safe place to pull over, but instead came to a halt on the approach to Ascari, on the left side of the track.

“I had not so much time so at that point I tried to find a safe place, but actually there was no place safe enough. So it took even more time. It was a big shame, because I think we looked good, but as soon as we stopped, we needed to reboot the car.”

Kobayashi said that the team would have to investigate the cause of the failure, which still remains unclear at the time of writing.

“I think we lost around a minute, so it cost quite a lot of time. But I think we did a great job. We just came back in time and obviously I think finally we came back to win, so thanks to the the team.

“We had a great car, it’s just a shame I had to do the reboot stuff, but we got quite similar things in Spa and I think since we got this kind of problem, we still need to investigate what’s going on.”

Toyota had a difficult day in terms of reliability, as the #8 sister car was suffering from a number of issues throughout the course of the race, primarily a fuel pressure problem that remained a thorn in the team’s side throughout the race and eventually saw it finish 33rd overall, 43 laps down on the race-winning #7 car.