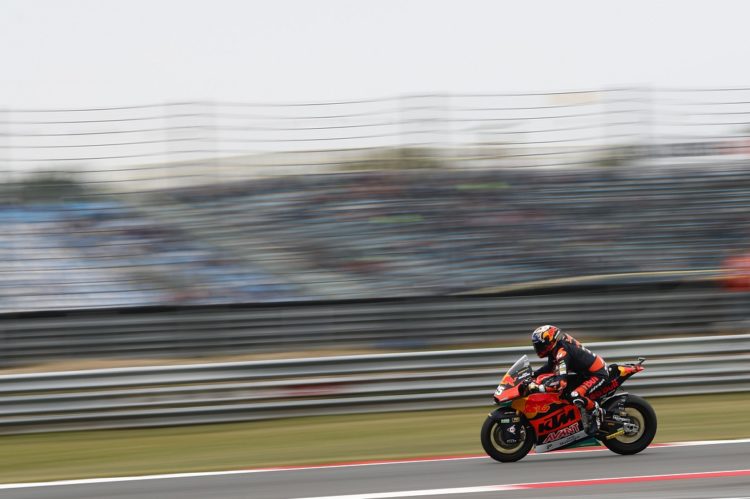 Raul Fernandez charged back to win the Dutch Moto2 contest at Assen despite dropping to ninth after making a mistake early on as he narrowed Remy Gardner’s points lead.

Pole-man Fernandez made a sluggish start as he dropped to fourth early on, the Spaniard keen to make a quick recovery back to the front as he looked to dive past Aron Canet to re-take third at Turn 7.

He ran well wide as he overcooked the entry to the bend though, the Ajo man lucky to not run off into the gravel as he dropped all the way to ninth as team-mate Gardner moved himself into the lead ahead of Sam Lowes.

Fernandez quickly began to stage a stoic recovery though as he carved through his rivals ahead, joining the lead trio of Gardner as well as Marc VDS pair Lowes and Augusto Fernandez by mid-distance.

He then managed to work his way through the lead pack across the next half-dozen tours, relieving Augusto of first position at Turn 1 as the race entered its final quarter.

The rapid rookie got his head down and immediately started to gap his peers as Fernandez tried to fight off Lowes, Fernandez posting a series of fastest laps soon after making his way into the lead.

He managed to craft a 1.6 second advantage by the time he exited the final bend, ultimately crossing the line just over a second clear of Gardner as he celebrated his third victory of the year.

Gardner’s customary late-race performance once again came to the fore as he looked to dispatch both Marc VDS machines ahead, a task the series leader was more than up to as he climbed past the duo to complete an Ajo 1-2 in the final couple laps.

Augusto managed to get the better of Lowes as he secured his first rostrum of the year, the Brit ending up fourth having led the middling stages of the encounter.

Marco Bezzecchi recovered from 16th on the grid to finish fifth as the VR46 man continues to lack the speed to seriously take the fight to the two premier teams of the class, Ai Ogura enjoying another solid ride to finish sixth for Honda Team Asia.

Jorge Navarro was seventh on his factory Speed Up Boscoscuro machine, while Xavi Vierge was just able to hold off Intact GP’s Marcel Schrotter for eighth on the run to the flag.

Celestino Vietti meanwhile completed the top ten on the second VR46 entry, the Italian just staying ahead of Somkiat Chantra in the closing circulations.

Aron Canet missed out on a strong result for Aspar as he crashed from seventh at Turn 3 with only a handful of laps remaining, while Fabio Di Gianantonio went down from fifth after out-braking himself at Turn 9 at around three-quarters distance.

Hector Garzo failed to take up his fifth-position starting spot after testing positive for Covid-19 ahead of the race on Sunday morning, the Pons pilot the first rider this season to have fallen victim to the disease.

Fernandez’s success sees him narrow Gardner’s point lead slightly to 31 as the Moto2 field head into the five-week summer break, the ever-consistent Bezzecchi remaining third but by an increased 56 adrift of the Aussie.