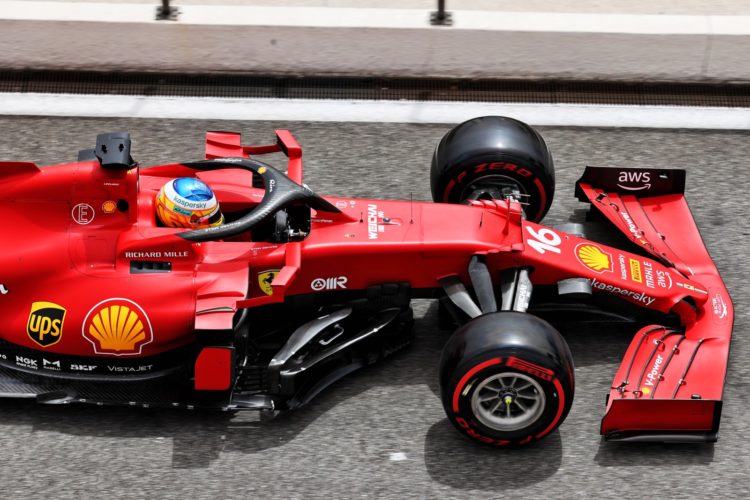 Ferrari’s rejuvenation at recent events had been one of the feel-good stories.

Its slump down the order through 2020 brought Ferrari its weakest result in 40 years but the early stages of 2021 highlighted that the work undertaken in its nadir was yielding dividends.

Its low-speed strength was witnessed in Monaco, as Charles Leclerc shot to pole position, with Carlos Sainz picking up the pieces by taking second in race trim.

Leclerc’s pole in Azerbaijan was more of a shock, and he duly slipped into the midfield in race trim, but Ferrari’s qualifying speed in France was relatively expected.

Sainz took fifth – behind only the Red Bull and Mercedes quartet – while Leclerc salvaged seventh, having struggled to get a feel on the SF21’s front end.

They maintained those positions through the opening stint – but that’s where the trouble began.

Sainz and Leclerc entered the graining phase on the Medium tyres far earlier than their midfield rivals and from that moment knew it was going to be a long race.

Leclerc bolted into the pits early and in doing so effectively condemned himself to a second stop, though he was hanging on for points even before coming in for another exchange of tyres.

Sainz held out for longer in order to make a one-stop work, in the process losing out on the undercut to Daniel Ricciardo, but even then was unable to resist Pierre Gasly and Fernando Alonso. The Aston Martin drivers, running the alternative strategy, also slipped past.

It meant Sainz finished 11th, with Leclerc a lacklustre 16th, as Ferrari left a race empty-handed for the first time in 2021. Its two-point advantage over McLaren swung to a 16-point deficit.

Ferrari did not shirk from the situation in its own press release, labelling it “a bad setback” and a “tough lesson” while conceding its drivers were “easy prey” for opponents.

“It’s been a tendency, and I’m not going to lie, it has been in the back of our minds a bit going to every race,” said Sainz, who previously struggled on graining in Portugal, where he also dropped to 11th after a strong qualifying result.

“We tend to struggle a bit in the races compared to qualifying, but I must say there have been a couple of weekends where this issue hasn’t appeared, for example Barcelona, the race pace wasn’t an issue.

“It’s pretty clear we have a very narrow window of a working range on front tyres and we tend to struggle a lot more with graining, and front wear, than our competitors and probably compared to the whole field.

“It is evident, it is obvious, you don’t need to be a genius to see we are clearly struggling.”

Leclerc concurred, explaining: “We have a very narrow window where we managed to make the tyres work and somehow it is very difficult for us to be in that particular window.

“And we clearly didn’t manage to put them in that window and we just struggled, with degradation from lap five or six of every stint. We struggled more than others.”

Sainz may have conceded that it was a potential issue in the back of his mind but there was little evidence of trouble on Friday. The second practice session took place in hot and sunnier conditions in comparison to race day, following heavy rain on Sunday morning, which washed away some of the rubber.

“On Friday we didn’t face this issue and were probably inside that narrow window of performance we had, and looked very strong on race pace, and our front wear numbers didn’t look bad, we were actually looking reasonable,” said Sainz. “That’s why yesterday night we went to bed very confident.

“On the laps to the grid the track was very, very tricky. I actually had a moment, as you guys saw on the video, it told me the track was on a different condition, but it is not an excuse [for the performance].”

Other drivers had issues – even those that finished in the points. Sixth-placed Ricciardo described his car as “a handful” while Gasly said he had “no stability, no rotation mid-corner, my traction was shit” with the situation “completely different than Friday, complete different than Saturday.”

But while they bagged useful points it was far worse for Ferrari.

“The other [teams], with very different conditions, a track one and a half second slower than Friday, they didn’t have graining,” said Sainz. “We just have a narrower window of performance and we need to work on our tyre understanding to see how we can make this window wider and better.”

Mastering Pirelli’s tyres has always been a dark art; just witness how much Mercedes struggled with warm-up in Monaco and Azerbaijan, for example, having previously flown in Spain. But can Ferrari address it for the rest of the season? Not necessarily. There may be further pain down the line.

“I think probably we may improve the situation but to solve it I think we need to have some hardware change, for example the rims, which is not possible in the regulations,” conceded Binotto.

“So for us I think it is important to try to understand and address it for next year, and in the meanwhile I think that this issue may happen again at some races, but not all the tracks. It is somehow quite track and weather conditions related.”

Ferrari’s pace was in evidence in the streets of Monaco and Azerbaijan – but in France the tyre issues highlighted the path is still faces to return to overall glory.