Schumacher ‘has to build up trust’ in Mazepin 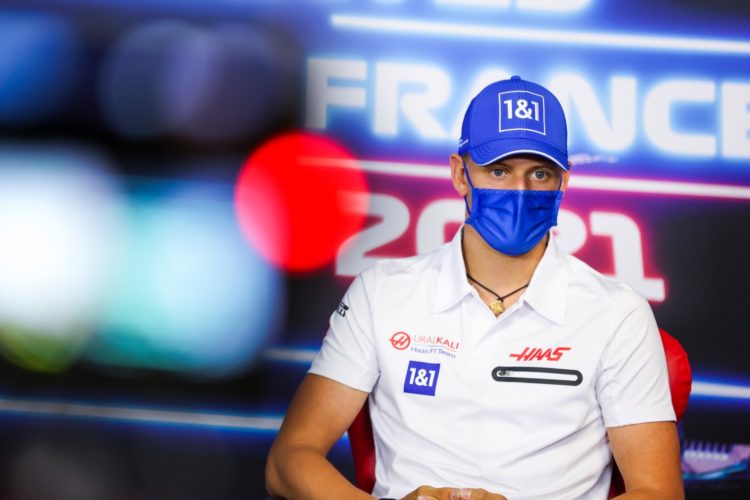 Mick Schumacher has suggested that he has to build up trust in Haas team-mate Nikita Mazepin after their last-lap battle at the previous race in Azerbaijan.

Schumacher beat Mazepin to the line by under a tenth of a second but did so after his team-mate jinked to the right, ostensibly towards his path, on the full-throttle run to the line.

It prompted an angry reaction from Schumacher while post-race Haas outlined that it had been down to a misunderstanding.

Schumacher revealed ahead of the French Grand Prix that Mazepin had apologised for the misunderstanding, and expanded on his thoughts.

“Obviously in the moment it was rather, well, confusing, in a way, because I was not expecting it at all, especially between team-mates,” he said.

“I understand it was the last lap, we’re all fighting, but if you come in [with] such a tow you have, [and use] what is left in terms of battery, there is no stopping, and the only way you stop someone is by scaring him or pushing him into the wall and obviously he tried to do that.

“I, in fairness, kept my foot down and got by him anyways but as I said it was unexpected from my side and that’s why I had such a strong reaction afterwards.

“But as I and the team said the air was cleared afterwards and it’s a fresh start from here.”

On whether he still had trust in the wake of the incident Schumacher said: “I think you have to race with him, so in that sense, and I think that trust is built, and for sure can be built again.

“Obviously right now, well, I don’t really know what to expect in a 1 vs 1 [situation], but at the end as well I’m sure after the talks we had with the team everything should be in order to build up on that trust, and we’re all racing drivers, so I’m sure we’ll manage.”

Mazepin, speaking in a separate press conference, played down the magnitude of the near-miss.

“There was no incident, both cars returned to the pits with front wings and the paint job was as polished as it was just before the race,” he said. “So I’d like to look at that in a pretty positive way.

“I think we’ve had a bit of a misunderstanding between us. I thought he would choose the inside line, but he chose the outside line, but when I saw he committed to it I backed out of it because in the end we’re not fighting for any points and the team result is the priority for me.”

Mazepin also suggested he apologised due to Schumacher’s reaction rather than for the situation itself.

“Our discussions that go on within the team I believe should stay with the team, however if it was already brought out [in public] I would just say I apologised to him if that’s how he felt, and he clearly was very upset,” he said.

“I would say it is very important that he doesn’t expect to have it too easy and I’m never going to not block for whatever reason, or one another, but I clearly didn’t expect him to be where he ended up being.

“If he felt the way he did I said sorry because that’s what I think I should be doing, however it wasn’t for my particular doings at that time.”