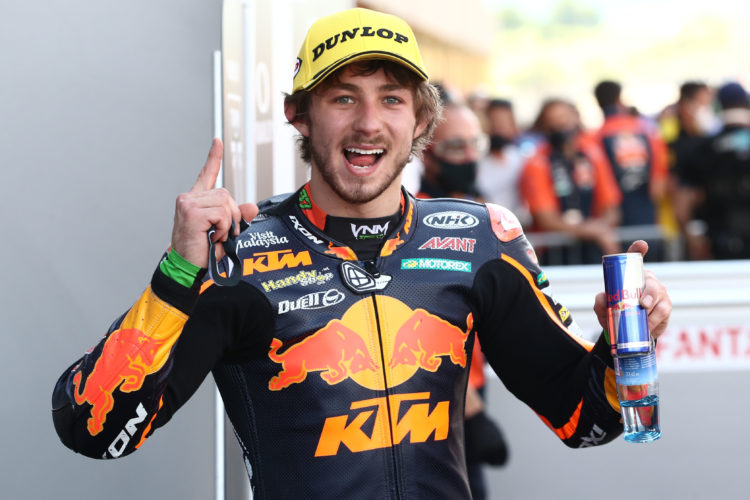 Gardner is currently competing with the KTM-backed Ajo team in the intermediate class, having joined the KTM family after enjoying a stand-out ’20 campaign with the SAG outfit in the series, the Aussie managing a career-best sixth overall in the riders standings with as first ever win coming in the season finale at Portimao.

His strong start to life within the Ajo Moto2 organisation has earned him a one year deal in the premier class next season, his team-mate yet to be announced by KTM and Tech 3.

Gardner says he is relishing the “incredible chance” afforded to him by KTM, but affirmed he is still focussing on grabbing the Moto2 world title before making the step up the motorcycle grand prix racing ladder.

“I’m extremely happy that KTM have given me this opportunity,” said Gardner.

“It’s a dream come true for me and what we have worked for up until this point. It’s an incredible chance for me and I cannot wait to ride the bike.

“I just want to thank KTM for believing in me. Right now we need to focus on finishing 2021 in a strong way. I want to thank also everyone who has supported me to reach MotoGP. We’re just getting started.”

Tech 3 KTM Team Principle Herve Poncharal reckons Gardner will be a “strong asset” to his team going forward, the Frenchman explaining the decision to sign him early so that he can fully focus on his Moto2 title tilt.

“We are very proud, happy and confident to welcome Remy,” said Poncharal.

“We believe he will be a strong asset to the KTM MotoGP line up and I think having taken this decision is now going to help Remy to focus 100% on his Moto2 World Championship and will also help us, the Tech3 KTM Factory Racing Team to focus on our 2021 season.

“So, welcome back, Remy, keep on pushing and come to join us for your MotoGP adventure in 2022!”

Gardner-the son of 1987 premier class world champion Wayne- will join Tech 3 for the second time in his career having competing with the French outfit in a two year Moto2 stretch across ’17 and ’18, a best result of fifth coming in his last outing with the team at Valencia in the latter campaign.

He currently leads the Moto2 riders standings by six points after racking up a total of five rostrums in the opening six contests-including a victory in last weekend’s Italian Grand Prix at Mugello- ahead of team-mate and rookie sensation Raul Fernandez, the Spaniard having already won two encounters as he looks to try and join Gardner at Tech 3 in MotoGP next season.

The squad currently runs ex-Ducati premier class racer Danilo Petrucci and Iker Lecuona, though both look vulnerable for replacement after a weak start to the year.

Petrucci currently sits 14th overall in the points after struggling to adapt to the RC16, though a strong ride to fifth at Le Mans in mixed conditions helped his failing to finish higher than 13th in the opening four encounters.

Lecuona meanwhile is currently a lowly 20th in the standings six races into his sophomore MotoGP term, the Andorran native having captured a best finish of ninth at Le Mans.