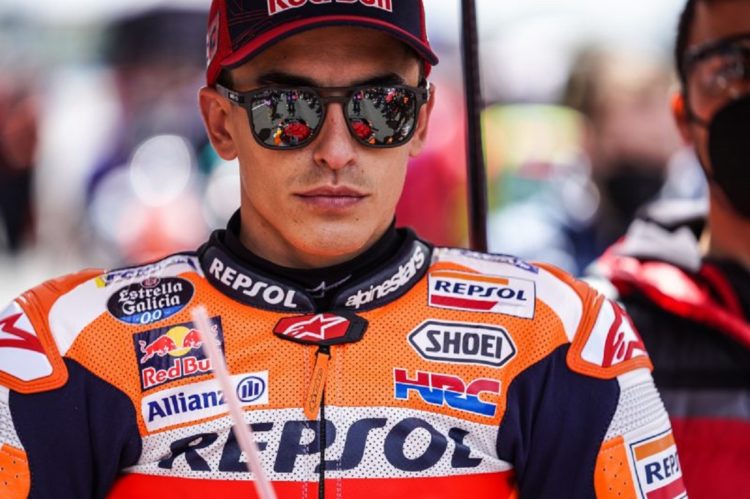 Marc Marquez reckons his crash on the opening lap of the Italian Grand Prix “will allow me to enjoy the Catalan GP more” due to being able to save energy.

Marquez was forced to retire from the Mugello contest after making contact with KTM’s Brad Binder at Turn 3 on the opening tour, the Honda man turning into the South African’s RC16 and flying off into the gravel as a result.

Binder was able to survive and continue on to a fifth place result while Marquez had to retire on the spot, the six-time premier class champion accepting fault in the incident but that it was the “worst outcome” possible due to needing as much mileage as he can get following his recent return for injury.

Marquez found positives though in being able to save energy for the upcoming Catalan GP at the Circuit de Barcelona Catalunya which will take place just seven days after the Italian encounter, his early exit offering him the chance to “rest” ahead of his second home event of the year.

“Unfortunately the race ended earlier than we expected, and this was the worst outcome possible for me because I need kilometres on the bike,” said Marquez.

“I had contact with Brad Binder, I think it was a racing incident because many times on that part of the track there have been similar crashes but it was more on me because when I entered Turn 2 I didn’t see him as I thought he was further back.

“Then when I changed direction we had contact and I crashed, luckily I crashes alone because it was my own incident and my fault, so this was OK.

“I think it was a positive weekend for us because I always think about my condition and feeling with the bike, and my (physical) condition was quite stable during the weekend and actually the crash on lap one will allow me to enjoy the Catalan GP more.

“Normally with a lot of laps in a row I suffer more with the right arm, so we took take a rest as I only completed half-a-lap so this is positive for Montmelo.”

Marquez doesn’t rate his chances of a competitive Catalan outing due to his Honda marque “normally struggling there”, although the loss of Moto3 rider Jason Depasquier during the Italian weekend was more prevalent in his mind leaving Mugello.

“We will see how we do there because it’s another type of circuit, normally we struggle there and it’s not normally the best for us (Honda),” continued Marquez.

“We learned a lot this weekend and I feel inside me a step, this is very good because I’m coming from a very difficult period and only myself and my team know my true conditions, we will keep working hard to arrive and make the next steps in the correct way.

“Overall it was a positive weekend for me although very hard for MotoGP as we lost a young rider and mate here in the paddock, and it’s always really hard but as always we will send a lot of support to his family and team, it’s tough to speak about but unfortunately we always have risk when we go out on track.”