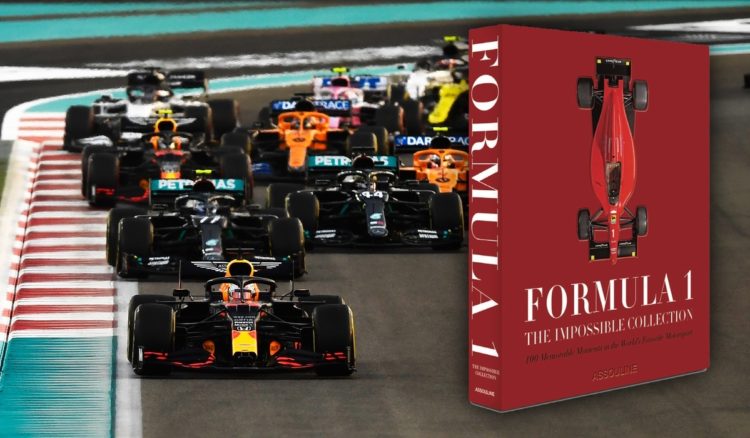 “Watch this,” author and journalist Brad Spurgeon replies as I ask him what makes his new book unique amongst the vast body of literature done on Formula One in the past.

He ducks out of frame for a moment before hoisting up a gigantic red book, holding it in front of the camera during a digital interview with MotorsportWeek.com last month.

“This is almost ten kilos. Look at this! It’s practically ten kilos, it’s 9.4 or something. When it arrived, it was twelve kilos including the package. There’s this inside of the box, it’s a beautifully padded thing.”

Spurgeon is holding up a copy of his new book: Formula 1: The Impossible Collection, listing the 100 most memorable and important moments in the history of Formula One.

He quickly admits that it is not just the size that makes his new project extraordinary, but that there is another stunning detail: the price.

“They’re selling this for 920 euros, 995 dollars, not sure how much it is in pounds,” he says. “This is an object. It’s not just a book and it’s Assouline Ultimate Collection.

So they’ve a Bentley car book, they’ve got a cigar book, football, American football. A hundred moments of American football. So it’s actually, in a way, Assouline’s look. I mean, it’s my look, I wrote the thing, but it’s packaged in an Assouline Ultimate Collection format. So it’s kind of a work of art.”

“When I saw what this entailed, I said ‘there is no Formula One book, like this book, that exists anywhere. So to start with it’s an objet d’art, so it’s an art object, there’s nothing like that in Formula One.

“But to me that also appealed to my stance of what Formula One is all about. As I said in my beginning, in my introduction [of the book], it’s about excess, it’s about money, it’s about high technology, everything is going to the limit.

“This book, in the Ultimate Collection, just fits hand in glove with that kind of mentality.”

Spurgeon, a Canadian-born veteran writer, journalist, filmmaker and musician based in Paris, was approached by New York-based publisher Assouline to write the book. First attending a Grand Prix in the late 1960s, he began working in Formula One media in the early 1990s.

“First article I ever did about it was 1993, for the International Herald Tribune. So that’s when I started, 1993.”

“Assouline came up with the idea to do such a book, and I was invited to write it. As soon as I saw the idea, I said ‘this is wonderful, I love it, great’. It felt like it was a great way for me to sum up all of my knowledge in one little spot, an overview of Formula One.”

How am I going to do this?

As Spurgeon soon discovered, compiling seven decades of Formula One history would prove to be an enormous challenge.

“When I was first offered to do this, I thought ‘ah cool, hundred top moments, no problem, now that’s cool.’ But I didn’t take long for me to realize that we’ve got a seventy-year championship, seventy-one seasons – this was done in the middle of last year, and I thought ‘now how am I going to do this?’

“The impossible is supposed to be kind of showing extraordinary achievements. Unbelievable, surprising, weird, etcetera.

“So I thought, looking at Formula One, in a book like this, in a list like this, I’m going to have to come up with several different, like impossible, crazy things that happened in Formula One.  Technology designs that were the most influential during that period, racetracks, people, I had to go through a kind of a broad cross section of exceptional things.

“But I felt I had to choose things by their influence as well, whether it be the image of the sport, or, you know, turns that like, for instance, if I chose an accident, it had, it had to be not just any accident, not just a spectacular one, but one that had something to do there’s something led to something. So Senna’s death was there. I mean, that’s a no brainer, but at the same time, it was because of all the safety things that happened after that.”

The book starts out with forewords from both FIA president Jean Todt and Formula One president Stefano Domenicali, before Spurgeon’s introduction takes the reader through the overview and history of F1 before presenting the 100 moments, from the first Formula One Grand Prix at Silverstone all the way to the current era.

Putting together the list was a process that took many months, as he had to frequently take stuff of the list, or compile certain moments into a single one. Spurgeon cites Martin Donnelly’s terrifying crash at Jerez in 1990 as one of the many he ultimately had to cut.

“The other thing is I made a list of maybe 150 moments or more first, and then I had to start reducing it,” he says. “So for instance, I had the accident of Martin Donnelly in 1991, or 1992, I can’t remember what it was. Which impressed me incredibly, it was this horrendous, horrendous thing where the guy was on the track and like a pile of broken bones. And he survived the accident.

“And there was this extraordinary imagery, you know, it was an impressive, impossible moment, but ultimately I had to say, ‘Well, you know, what effect did this have on the whole series, and what was extraordinary beyond the impossibility of this moment?’

“And it didn’t, so eventually, I cut it. You know, I had to put car developments over the years, the first victory by a rear-engined car and all these things.”

“I think that ultimately, what I said to myself: now, lots of people like you, or other Formula One fans or journalists who know the history as well as I do, are going to say ‘what the hell, why didn’t you put this moment?’ ‘How could he do this without putting that moment?’

“And I thought, there has to be an element here where this also has to be Brad Spurgeon’s choice. So you know, I put, of course, Fangio’s greatest race, in Germany in 1957.”

“Then there were things like, I eventually had to kind of combine some moments. So I have, in my original list, the 1989 crash between Senna and Prost at Suzuka pushing each other off.

“And then I also had the 1990 crash, the same crash, you know, because for me they were both extraordinary moments, even if they were linked, etcetera.

“But ultimately, I decided to end up doing only the ‘89 [crash]. And then in the caption ‘putting this also happened, and then one year later it happened.”

A book of such size, scale, and most importantly, price, also brought other tremendous challenges. As Spurgeon readily admits, the thought of having mistakes in a book of this magnitude made him very cautious about what he was writing.

“That’s one of the problems and traps of a book like this, or a list like this,” he says. “Counting only on the stuff I really knew could lead to little problems and inaccuracies.

“Writing those captions, right in the moment, was something I vastly underestimated the amount of effort and time and work required, because I thought the big job would be writing the introduction. And so I did the introduction.

“And then I start writing the captions, and I say ‘Oh my god, this is a book that is selling for $1,000. I can’t let through the slightest mistake in these captions, nope, I can’t get anybody to pay $1,000 for this book and find out that there’s mistakes in the captions’.”

“So I had to go through, with a fine tooth comb, many, many times those captions to make sure. I can give you an example of how we as journalists get trapped the most. I think we think we know the best. And so we’ve put them in and maybe we don’t check them as much or as hard as we think that we should.”

This obsessive attention to detail goes down to the tiniest facts. Spurgeon gives a concrete example: the length of the Nürburgring Nordschleife. The infamous German track hosted the German Grand Prix from 1951 to 1976, but was reworked multiple times.

“This tiny little instance, you know, each caption often has 10 to 15 different facts that have to be checked.

“Now, going back to Fangio’s 1957 great race. So I say it was on the old Nurburgring Nordschleife. And so I have to put down the length of the Nordschleife. So I know it’s something like 21, 22 kilometers, but I can never remember the exact length.

“So I just do a quick search on the internet and Wikipedia gives me the length. And it was something like, I don’t know what it was, 21.3 [kilometers] or something. And so I put that in.

“Now in the later stages I said ‘Look, you can’t trust yourself or any work that you do. You’ve got to change every single fact in this thing again, again and again, every single one.”

“So then I went back to several other sources, including the Marlboro guide that I have, the red guide of Formula One statistics. And I found that actually 57, it was something like 22.1 or whatever, not 21.3 kilometers. So I put the 1957 one.

“The thing was full of facts like that, that have to be checked, double checked, triple checked. And I couldn’t, I didn’t want to trust only my knowledge.”