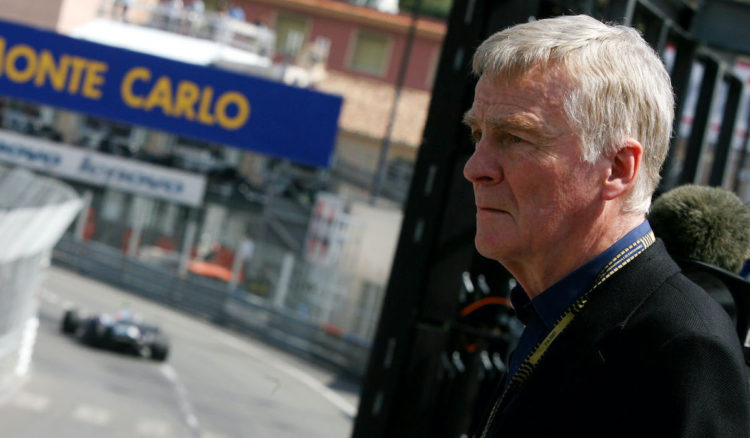 Max Mosley, who led Formula 1’s governing body the FIA for 16 years, has died at the age of 81.

Mosley, who studied at Oxford University, was an amateur racer in his 20s and was on the grid for the Formula 2 event in which Jim Clark was killed.

Realising his limitations behind the wheel he co-founded the March Engineering squad that competed in Formula 1 in the early 1970s but the Briton’s career in motorsport became more involved in the political scene.

Mosley was involved in the early stages of Formula One’s Constructors Association and the Concorde Agreement, settling matters between teams and the governing body, having trained as a barrister and lawyer.

Mosley worked with incumbent Jean-Marie Balestre in restructuring the FIA and succeeded the Frenchman as President in June 1993.

The first year of Mosley’s FIA Presidency was rocked by a string of accidents, including the fatal crashes of Ayrton Senna and Roland Ratzenberger at the 1994 San Marino Grand Prix, that prompted an overhaul of safety measures in Formula 1 and throughout motorsport, and he formed the Formula One Safety Commission in 1996.

Away from Formula 1, and motorsport itself, Mosley spearheaded the FIA’s campaign to modernise crash test standards for road cars and promoted the independent Euro NCAP crash-test organisation, serving as its Chairman for eight years.

The organisation publishes safety reports on new cars, awarding star ratings, based on a variety of crash tests, including front, side and pole impacts, and collisions with pedestrians.

Mosley stepped down as part of a peace offering amid a dispute between eight Formula 1 teams, who threatened a breakaway series, in order for all teams to commit to the championship into the 2010s.

He had often faced the ire of teams for his close collaboration with Formula 1 supremo Bernie Ecclestone, with the pair taking control of the sport, while he often heavily involved in several major scandals, most prominently the McLaren Spygate saga in 2007, in which he pushed hard for a tough punishment, eventually settled at a fine of $100m.

Mosley’s personal life was always under scrutiny; his parents were renowned fascist Sir Oswald Mosley and Lady Diana (nee Mitford), with Adolf Hitler among the guests at their wedding in 1936.

That was thrust into the spotlight in 2008 when British newspaper News of The World exposed his participation in a sex party. He later won a court case against the paper, which rejected their allegations regarding Nazi connotations, and spent much of the 2010s campaigning for tighter press regulation.

“It’s like losing family, like losing a brother, Max and I,” Ecclestone is quoted to BBC Sport.

“He did a lot of good things not just for motorsport, also the industry. He was very good in making sure people built cars that were safe.”

“I am deeply saddened by the passing of Max Mosley,” said Jean Todt, successor as FIA President.

“He was a major figure in F1 and motorsport. As FIA President for 16 years, he strongly contributed to reinforcing safety on track and on the roads. The entire FIA community pays tribute to him. Our thoughts & prayers are with his family.”