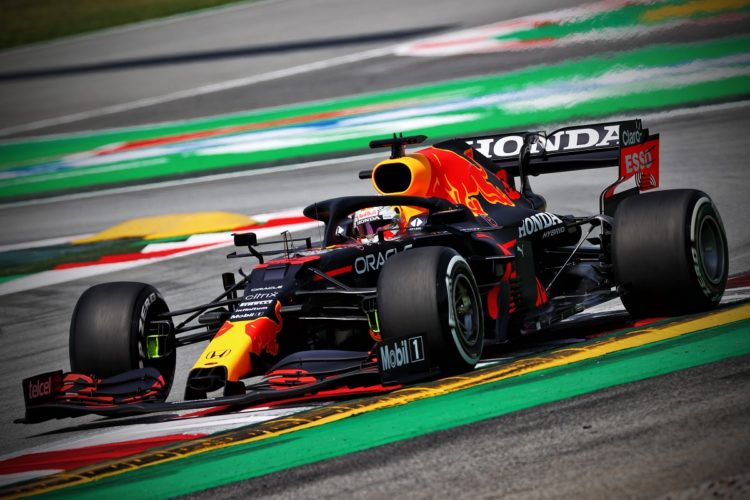 Mercedes and Red Bull have been embroiled in a tight battle at the front of the Formula 1 field since the start of the 2021 season. Currently, the advantage sits with Mercedes, who boasts two victories to Red Bull’s single top-step finish.

Formula 1 teams normally arrive at the Circuit de Barcelona-Catalunya with sizeable amounts of data from pre-season testing, but the location was changed to Bahrain for 2021, while the European venue has also undergone a minor revision with the reprofiling of Turn 10.

Mercedes managed to top both practice sessions with the fastest lap times, while Red Bull was left with its two drivers at the foot of the top 10.

But this was largely unrepresentative, at least on Max Verstappen’s side of the garage after his Turn 10 error, and it is difficult to draw a firm conclusion as to who is on the front foot on long-run pace.

Lewis Hamilton and Valtteri Bottas both split their high-fuel runs between the Medium and Soft compound, while Red Bull’s Max Verstappen and Sergio Perez stuck to the Soft tyre. On the Medium compound, both Mercedes drivers were able to dip below the 1:23s, the only team in the field to do so. Their times on the Softs were slower, reading a 1:23.3 (which Perez also achieved on the Softs) for both drivers – perhaps due to extra fuel onboard.

Verstappen’s long-run pace on the Softs looked to be a long way off, as he trailed a Ferrari and a McLaren as well as his team-mate and both Mercedes, however the Dutchman was calm post-session, insisting there is “nothing shocking” going on.

“We seem quite competitive,” Verstappen asserted. “How competitive we’re going to be tomorrow is always going to be a question mark but from our side, we were quite happy. Of course you always want to improve and you want to do better but there was nothing weird going on today.”

That potentially bodes well for Red Bull at a circuit where Mercedes has dominated in Formula 1’s hybrid era, with its win streak interrupted only by the team’s first-lap immolation in 2016.

The battle for third in the Constructors’ Championship seems to be firmly between McLaren and Ferrari, who have already both managed to pull out a small gap from the rest of the midfield pack.

Charles Leclerc and Lando Norris both posted an average long-run lap time that bested Verstappen, running the Medium compound. While it’s unlikely they will challenge the Red Bull driver on Sunday, their position suggests they are still at the right end of the midfield fight.

Carlos Sainz and Daniel Ricciardo, in the other Ferrari and McLaren respectively, were separated by a three-tenths in the long-run lap time leaderboard, with a handful of cars lodged between them and their team-mates.

Alpine, who endured a difficult start to the year, looked to have turned a corner at Portimao, and their strong form continued on Friday at Barcelona with Esteban Ocon and Fernando Alonso both recording top-five lap times in the qualifying simulation runs. The team has scored points with both drivers at the last two grands prix, and that trend may well continue on Sunday judging by the respectable high-fuel pace they set.

However, hot on their gearbox is AlphaTauri, whose AT02 has shown a lot of promise in the early stages of the season, but doesn’t have a strong result to back up the potential. The four drivers associated between Alpine and AlphaTauri were all separated by just one-tenth in the long runs, with Ocon running the Medium compound compared to the Soft for Alonso, Pierre Gasly and Yuki Tsunoda.

Aston Martin’s disappointing start to 2021, backed up by the fact that it is 35 points worse off compared to 2020 after three rounds, may well continue in Barcelona. Friday’s times suggest that they are seventh-best in the field, however a note of encouragement is that Sebastian Vettel was buoyed by his “best Friday” since joining the Silverstone-based team.

Williams, who endured a disastrous race in Portimao last time out, will be hoping to bounce back with a strong outing this time around. George Russell’s pace placed him two-tenths behind Antonio Giovinazzi in the pack that occupies the final three spots in the Constructors’ standings. But given the peaky nature of the FW43B that may change depending on the conditions across the remainder of the weekend.

For Haas, Mick Schumacher’s pace continues to be encouraging, as the German once again appears to have the handle over team-mate Nikita Mazepin. In fact, Schumacher’s pace rivaled that of Nicholas Latifi, perhaps suggesting that the battle between the duo, which manifested last weekend, could be once again on the cards.