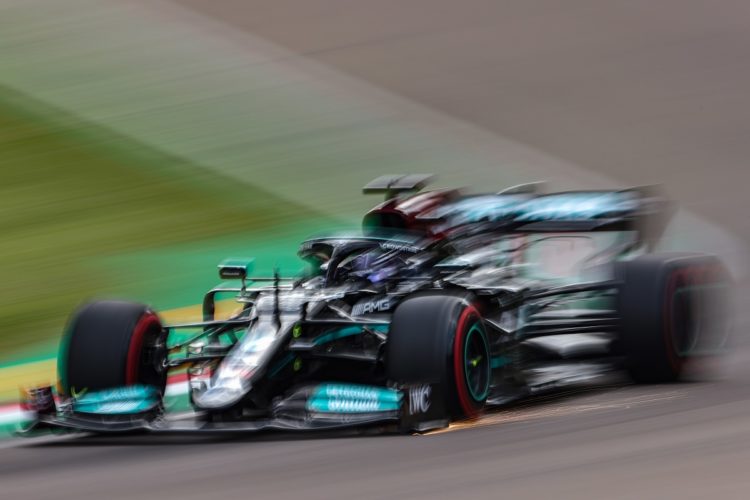 The battle between Lewis Hamilton and Max Verstappen at the Bahrain Grand Prix last month ignited the hope that a close title fight between the duo would occur.

Mercedes struck the first blow in Bahrain, and the early indication at Imola is that the reigning champions are on the front foot.

It was a less than ideal day for Red Bull. During FP1, Sergio Perez made contact with former team-mate Esteban Ocon, ending his session early. In FP2, Verstappen completed just four laps before he came to a halt along the main straight with a suspected driveshaft problem.

Mercedes, meanwhile, was in a much happier place at Imola compared to three weeks ago in the desert. Bottas, who topped both of Friday’s practice outings, stated the car is “definitively better” in the cooler conditions at the narrow Imola compared to Bahrain.

Hamilton added that Mercedes has “worked really hard to try and understand what happened in the last race where we were weak”, and believes that the Imola track “has also come a little bit more in our direction”.

No doubt, it was a strong start for Mercedes, whose early confidence is backed up by the pace it showed during the high-fuel runs towards the end of FP2. Verstappen’s absence from much of the session gave Perez the task of compiling the data – however initial average lap times indicate that it is advantage Mercedes following Friday free practice.

Bottas, Hamilton and Perez all completed their long-runs on the Medium compound, with Bottas’ average lap time over four-tenths of a second faster than Perez’s. However, without Verstappen’s times in both high and low-fuel runs, it’s impossible to accurately suggest how the Mercedes vs Red Bull battle will continue this weekend, given the expectation that the Dutchman would be faster than Perez.

Ferrari’s pace in Bahrain confirmed that the team has taken a step forward from its disastrous 2020 campaign, with Leclerc’s pace on Friday at Imola a welcome sight for the team, perhaps balancing out the late-FP2 crash he suffered. Whether or not the team were doing some early showboating at their home event remains to be seen – however Leclerc’s average lap time on both the Soft and Medium compounds places him ahead of Perez.

Also in the mix with Perez is Pierre Gasly in the AlphaTauri, who showed strong pace in Bahrain before his race was effectively ended following early contact with McLaren’s Daniel Ricciardo. Gasly did much of his running on the Soft compound, and based on that data alone, he is two-tenths down on Perez. However, his overall pace, with the brief stint on the Mediums also considered, leaves him on par with the Mexican.

Moving down the midfield grid, a tightly contested group features Sainz and Tsunoda, but is surprisingly fronted by the Alfa Romeo of Antonio Giovinazzi. The Italian ran the Medium tyres compared to the Softs of Sainz and Tsunoda, and while it is understood that Alfa has made gains from 2020, it is unlikely on race day that the red and white-livered car will be placed so high up in the field– Giovinazzi’s team-mate Raikkonen was third last in the order.

Williams looked rapid through its high-fuel runs, besting teams such as McLaren and Aston Martin. George Russell was the only driver to complete a long-run on the Hard tyre, lapping an average of two-tenths faster than team-mate Nicholas Latifi.

McLaren, which currently occupies third in the Constructors’ Championship, had a tougher day, with Lando Norris admitting that the car is “not as settled compared to Bahrain”. Fuel loads may have played a part in the team’s apparent lack of long-run pace, however Daniel Ricciardo says the team will put much of its focus into Saturday qualifying in order to obtain track position for the race. Ricciardo also accepted that he is still lacking confidence from the MCL35M at a venue where he claimed a podium six months ago.

In the mix with the McLarens was Aston Martin, who left Bahrain with just a single point under its belt. The current aura surrounding the Silverstone-based squad is frustration, as it shouts about how it has lost out in the new regulations that were introduced this year, cutting away downforce from the floor, which F1 says was done so in order to protect the Pirelli tyres from overloading and puncturing during the season.

Stroll breached the top 10 during the low-fuel runs at Imola, but wasn’t near that slot in the long runs on the Medium compound. His team-mate Sebastian Vettel lingered close behind.

Alpine’s run with Alonso on the Soft compound looked surprisingly poor, with the veteran Spaniard second to last on the average lap time sheet. Things looked better for Ocon further up the order, however the team doesn’t look placed to repeat its podium-achieving performance from Imola less than half a year ago.

At the back of the grid, Haas suffered an uneasy day, with Nikita Mazepin hitting the wall at the end of FP2. A precautionary gearbox change hampered his running in FP2, leaving Schumacher to provide the clear-cut lap times on high-fuel. As expected, the team will challenge at the back of the grid.